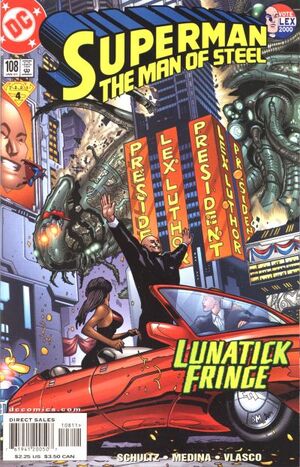 Appearing in "Metropolis is Burning"Edit

Synopsis for "Metropolis is Burning"Edit

A ticker tape parade is being held in honor of Metropolis' first son, Lex Luthor, the new President of the United States. However, not all came to honor the president, as a group of protesters is quickly being hurried away by the police, with a strong hint that they are currently controlled by Lex. The protesters are attacking the situation in Suicide Slum, apparently made worse by the recent Brainiac 13 upgrade that has turned their neighborhood into a barren wasteland area of the city.

Meanwhile, Lois and Clark stop in to the Steelworks in an attempt to tell John Henry Irons that Superman and Clark are one and the same. Just as Superman is about to reveal himself, Irons reveals that he already knew, and actually feels a little insulted that they hadn't figured that he would already know by now. Regardless, he is pleased to feel that Superman now respects him enough to officially let him in on the secret.

Luna, the leader of the Cybermoths, has escaped from the Phantom Zone with a strange creature as her pet, the Lunatick. She challenges Io, the woman who took over the Cybermoths while she was in absence, for leadership, and succeeds while demonstrating the Lunatick's ability to absorb and re-use digital power. Unfortunately, the Lunatick becomes 'drunk' on the power, and heads on a rampage towards LexCorp.

Superman and Steel eventually tracks down the Lunatick, which they and the SCU attacked the creature. However, due to the Lunatick's nature as a creature of the Phantom Zone, their attacks, grounded on a different form of physics than it operates on, are pointless. Superman and the S.C.U. attempt to distract it while Steel works on a way to cut off the 'Lunatick's power. Steel is aided in this by a mysterious stranger who turns up at Steelworks. This stranger has had unusual things happen to his arm due to the infusion of futuristic technology which Metropolis received. When he closes his hand over a Kryptonian power crystal which in some ways controls the interface between reality and the Phantom Zone, the Lunatick's power is shorted out, just before it reaches LexCorp and is then sent back to the Phantom Zone. Steel is very glad to receive this help... from long-lost friend Professor Hamilton.

Retrieved from "https://heykidscomics.fandom.com/wiki/Superman:_Man_of_Steel_Vol_1_108?oldid=1508392"
Community content is available under CC-BY-SA unless otherwise noted.