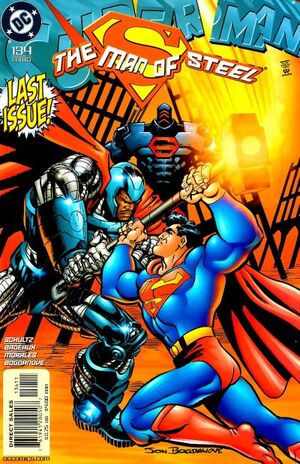 Appearing in "Every Little Thing"Edit

Synopsis for "Every Little Thing"Edit

Clark Kent and Perry White walk in Centennial Park. Perry notice that Clark looks troubled, which Clark tells him that it is hard pretending that he has been fired and disgraced from the Daily Planet while he is really working underground against Lex Luthor. More than anything, Clark is sick of lying to Lois. Clark recalls the previous day.

As Lois and Clark got ready for the day, Lois tries to convince him to stay home and not go job hunting. Clark tells her that he has to go, and heads out the door.

Across Metropolis, John and Natasha Irons talk about the injuries he sustained from Manchester Black as she runs a diagnostic on her uncle. His brain has been strained too much, and putting on the Steel armor again would probably kill him. John walks away from her, muttering that Black hurt him once before and the Entropy Aegis armor saved him then. Perhaps he was meant to wear the armor.

As Clark walked across the city, Lois quietly follow him. He should have been able to detect her, but he got lazy. She followed him into an old condemned warehouse where he had set up shop for his investigation into Luthor. Following Clark to a back room, Lois wonders what is in it when suddenly he is forced to leave on an emergency.

Superman soars across to the Steelworks, where Natasha frantically asks for his help. There John Henry stands, wearing the Aegis and holding onto S.T.R.I.P.E.'s fist. Superman quickly pulls S.T.R.I.P.E. away and tries to reason with a corrupted Steel. Steel struggles for a moment and then explodes in a fury, declaring himself the Aegis and forcing Superman back with a burst of energy.

Superman and Steel grapple for a moment before John declares himself Imperiex reborn. Suddenly, Natasha fires an energy beam between the two of them, forcing Steel to back away from Superman. In his delirium, John raises an arm and sends a bolt of energy flying toward Natasha. At the last instant, Superman dives in front of the teenager, intercepting the beam and saving Natasha from certain death. Superman looks on in amazement that his friend could turn on his own family. Steel approaches and finally removes the helmet. With his eyes glowing an unnatural red, he tells them that he can no longer remain on Earth and that his master is calling him home. Rising into the sky, a sphere of energy surrounds him and in the next instant, he is gone.

Returning to his makeshift office, Clark finds Lois standing there, looking in disbelief at the hundreds of pictures and notes hanging on the walls. Clark asks why she tailed him and she responds that she knew something wasn't right. She asks why he is so obsessed with Luthor and why he insists on doing this. Clark tells her that Luthor took Clark away from him, and he needs to prove it to the world.

In the present, Clark tells Perry that he developed a new system for organizing notes so that no one else would understand them. Lois definitely would not have seen anything substantial there. Perry apologizes for doing this to Clark, but then tells him that it must be done. Clark tells Perry that there is a difference between a secret and a lie, and he fears that the price of one may be much worse.

In their apartment, Lois calls Martha Kent. She struggles for a moment, and then tells Martha that she thinks that Superman is losing Clark Kent.

Later that day, Superman find Natasha cleaning up the damage in the Steelworks. He apologizes to her for bringing John back from the moon in the first place. He had died there and he should have let him rest there. Natasha says that his test results were scary. The attack from Manchester Black should have killed Steel, but his link with the Aegis armor kept him alive. Superman tells her that her uncle was really someone special, and Superman would not be alive today if it was not for him. Superman asks her what she is going to do, and Natasha tells him that she will continue on her uncle's work there. Superman tells her no matter what she does; she should make her life count for something, and make the world a better place.

Retrieved from "https://heykidscomics.fandom.com/wiki/Superman:_Man_of_Steel_Vol_1_134?oldid=1460981"
Community content is available under CC-BY-SA unless otherwise noted.