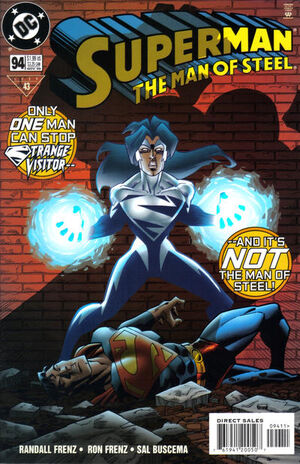 Appearing in "Who is Strange Visitor? Chapter Four: Why?"Edit

Synopsis for "Who is Strange Visitor? Chapter Four: Why?"Edit

Superman is punched through the wall of S.T.A.R. Labs by the Parasite. Strange Visitor manages a counter-attack but she too is punch back, though Superman catches her. The Parasite reveals to Strange Visitor that he has gained her memories as well as her powers, but she's been suffering from amnesia. Everyone evacuates the area, and Professor Hamilton called the SCU from his anti-grav car. Both heroes team up to stop, Parasite, but he stops them. The Parasite then flees as a ball of energy.

Parasite lands in the middle of Metropolis as the SCU move in. When Superman attacks, Parasite punches him through the rotor blades of an SCU chopper. Superman crashes to the floor while Strange Visitor saves the chopper. However, Parasite attacks Strange Visitor again, but Superman knocks her clear of his blast.

The SCU choppers fire missiles at Parasite, which he easily deflects. Superman and Strange Visitor take one each and deal with it in their own particular way. By the time Strange Visitor returns, Parasite has capture Superman and is draining his powers. Strange Visitor grabs Parasite and begins to drain him, carrying him off and up into space, where she regains all her memories. She is Sharon Vance, also known as Kismet. She left home after her parents died, and was struck by lightning on her plane, giving her amazing powers. As the powers build up it can no longer be contained and there's an explosion.

Back on Earth, people begin to worry when Strange Visitor returns with Parasite tossed over her shoulder. All ends well except for Billy. She no longer wants to marry him as she is now Strange Visitor, a new super-hero.

Retrieved from "https://heykidscomics.fandom.com/wiki/Superman:_Man_of_Steel_Vol_1_94?oldid=1460915"
Community content is available under CC-BY-SA unless otherwise noted.