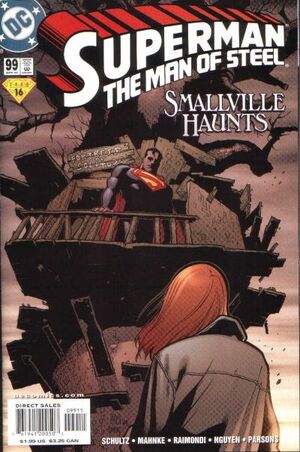 Appearing in "All That Dwell in Dark Waters"Edit

Synopsis for "All That Dwell in Dark Waters"Edit

Clark is visiting his parents again and expressing his concerns about his marriage when he hears the sound of screeching tires coming from Drear Lake. A quick change, and a suggestion that the Kents call the emergency services, and Superman is off. As Superman flies to the lake he recalls the old stories about it being haunted. The lake is covered in a film of fog, but a burst of super-breath gets rid of it. Plunging into the lake, Superman is alarmed to discover the car at the bottom contains no less than Lana (Lang) Ross. Having got her to safely she quickly panics and tells the Man of Steel that Pete is down there too.

Superman dives down again, and begins to pull Pete's body free when he comes face-to-face with a tall, green haired woman. She tells him that she, Unketeli has claimed the life of Pete Ross. Telepathically she informs Superman that Pete Ross is evil and that he belongs to her. Unketeli attacks Superman. Her supernatural powers make Superman feel weak.

Unketeli is the spirit of the lake and a spirit of vengeance. Long ago, evil men drowned a young girl in Lake Drear. The spirits of the earth took pity on her and made her one of them. Superman feels sorry for the woman, but does not agree that Pete is evil. Cutting his way free with his heat vision, Superman rushes Pete to the surface. By the time Superman gets to the surface the ambulance has arrived. The men recognize Pete as an ex-congressman. Superman leaves.

Back at the Kent's farm, Clark looks up at his old tree house. Lana arrives and disturbs his thoughts. Lana confesses that she and Pete were arguing when they came off the bridge. Clark hints that he is having similar problems, and then changes the conversation to Pete and questioning Lana if she anything down there. Lana tells Clark that she doesn't think so, and then asks why he is looking at his old tree house. It was his Fortress of Solitude as a child. Lana tells Clark that she sees him as a farmer. He wants to help things grow, and do the right thing. Clark suggests that introducing alien species to the land can do more harm than good. Lana points out that he isn't an alien. He has more in common with humans than he thinks.

Appearing in "In the Belly of the Beast"Edit

Synopsis for "In the Belly of the Beast"Edit

Deep in the bowels of Metropolis, Steel lies in wait watching a group of cybernetic thieves. They are tapping into the stream of digital information. To make matters worse they are also laying explosives. Steel dives into action. Natasha (who is communicating with Steel via a new psyber-link), tells her uncle to be careful, especially in regarding of his a new suit.

The thieves begin firing and run, so Steel goes to see to the bomb. There isn't time to figure out the mechanism, so Steel just gathers all the parts together and pulls it all into his chest. The new armor survives.

Superman arrives on the scene. Steel fills Superman in on what he knows about the thieves, which isn't much. Steel believes that maybe the thieves can gain control of the city from Lex Luthor, if they can access the data stream.

Suddenly Natasha comes over the psyber-link, as there is a problem at the Steelworks. The two heroes rush there. En route, Superman asks Steel about a residue that he heard Natasha mention. Steel explains that it was left behind by Brainiac 13 when he rebuilt the city.

When they arrive, the residue has grown to a huge size and is trying to suck everything into it. Steel rescues Natasha. Superman dives into the source, but it is too hot and there is nothing to grab hold of. Steel has an idea. Telling Superman to get out of the way, he tips 24 tons of molten iron into the residue. This has the effect of turning it into a black hole... suddenly it disappears. As Steel walks towards where it was, his hand disappears. Superman knows what is happening. He's seen one of these before, in the future. It's called a Tessaract - a pocket universe. Then Superman has an idea and ask Steel to help him build a new Fortress here.

High above in the roof of the Steelworks, one of the techno thieves is watching.

Retrieved from "https://heykidscomics.fandom.com/wiki/Superman:_Man_of_Steel_Vol_1_99?oldid=1460924"
Community content is available under CC-BY-SA unless otherwise noted.