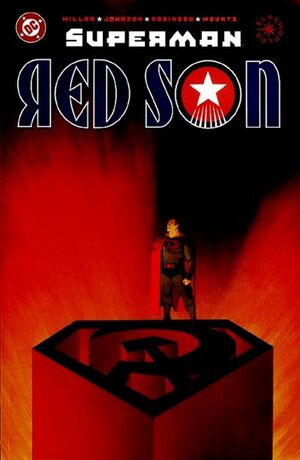 You know something weird? I've had the same dream almost every night ever since I was a little girl. I dream I'm falling through the clouds and the Earth's getting closer and closer, but I'm never afraid because I know that you're there to catch me. Can you believe that? You catch me almost every night. Always in the nick of time... and now you're real, Superman. As real as any of this.

The first part starts in the 1950s, and sets up the board and the pieces. The world is nearly identical to the real one to begin with, but starts diverging rapidly as the Soviet Union unveils its newest asset, Superman, upsetting the Cold War and turning the nuclear arms race into a super-being arms race.

At this point Superman is a newcomer in Stalin's inner circle. Having grown up in Ukraine, he's kind-hearted and just but also dedicated to the cause of communism. When possible, he spends his time detecting and preventing accidents around the USSR. His opposing number is the American Lex Luthor, a legitimate scientist at the employ of S.T.A.R. Labs and a super-genius who is very well aware of his intellect and has very little regard for lesser minds. He is married to Lois Lane. At the behest of his CIA contact, Agent Olsen, he begins attempts to destroy Superman.

In order to collect genetic material for his first attempt, Luthor causes Sputnik 2 to plummet towards Metropolis. As Luthor predicted, Superman arrives in time to divert its course. In the process, he meets Lois Luthor, and though there is immediate romantic tension between them, they do not pursue their mutual attraction as Lois is married. The satellite is retrieved by the United States government and Luthor uses the traces found on it to create a Bizarro clone of Superman.

Meanwhile, Superman meets Wonder Woman at a diplomatic party. She becomes rather smitten by Superman, but he is forced to leave when he spots Pyotr Roslov, Chief of the NKVD and Stalin's illegitimate son, who is drunk and extremely disgruntled. Pyotr is angry at everything, especially at Superman, whose arrival has rewritten the Soviet Union's power structure, turned his father's attention away from him, putting a stop to his chances of advancement. Having had to shoot a dissident couple before their own son's eyes for printing anti-Superman propaganda, Pyotr snapped and arranged Stalin's poisoning, which in turn has caused him horrible guilt, though not enough to confess. Stalin dies from cyanide poisoning, but Superman declines the leadership of the Party.

Meanwhile, Luthor's clone is finished and engages Superman over near Britain. The duel is inconclusive on its own, but causes collateral damages and deaths in London and an accidental nuclear missile launch. The clone, which has been made too much like Superman, sacrifices himself to save millions. Horrified at the implication that Superman is more intelligent than himself, Luthor leaves S.T.A.R. Labs and founds Luthorcorp, dedicating his life to destroying Superman. Lois is nigh-abandoned and longs for Superman. Superman himself tries to put this all out of his mind, but a chance meeting with Lana Lazarenko, his childhood flame, changes things entirely. Seeing the suffering of her and her children, Superman realizes that his powers could be used for a greater good, and assumes leadership of the country in order to transform it into a utopia.

Retrieved from "https://heykidscomics.fandom.com/wiki/Superman:_Red_Son_Vol_1_1?oldid=1461044"
Community content is available under CC-BY-SA unless otherwise noted.