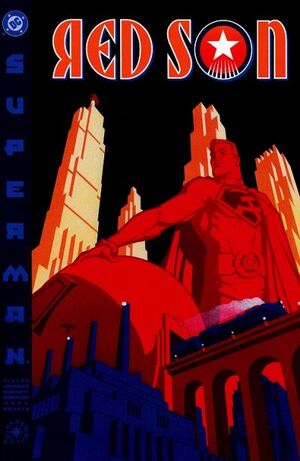 You were supposed to steal Moscow not Stalingrad. Superman lives miles away from Stalingrad. God, I would have expected a Level-Twelve Intelligence to be able to understand a blasted road map.

It is the 1970s, and the fictional world of Red Son has diverged greatly from our own. John F. Kennedy is president of the United States, having replaced the tragically slain Richard Nixon, who won the 1960 election but was assassinated in 1963. Luthor has devised and executed several plans to thwart Superman, none of which have worked. Only the United States and Chile remain independent from the Soviets, and both are on the brink of collapse, while President Kennedy is forced to grant independence to Georgia. The Superman-led Soviet Union has grown without resorting to war, and has virtually eliminated poverty, disease and the like, but this has started to infringe on individual liberties, and Superman is fast becoming a Big Brother-like figure. A brain surgery technique that turns dissidents into obedient drones, or "Superman Robots," is in use.

Wonder Woman and Superman have now become a duo, using their superpowers to save lives in addition to their ambassadorial and governing duties. Wonder Woman has fallen for Superman, but he sees her simply as a comrade, and is cheerfully oblivious to her love for him. Lois Luthor succeeds Perry White as the editor-in-chief of a failing Daily Planet, while her estranged husband feverishly works on his obsession.

Luthor plans to shrink Moscow, but this fails when Brainiac, his assistant, shrinks Stalingrad instead. Superman intervenes and retrieves both Brainiac's central unit and the tiny city, putting an end to the Brainiac-Luthor co-operation, although he is unable to restore Stalingrad and its inhabitants to their proper size. This becomes his one failure and a source of great guilt.

Luthor's second plan involves Batman, who is revealed as the boy Pyotr orphaned early in the story, now a grown man and the head of an anarchistic terrorist network that sees the abundance forced upon the people by Superman's system as little more than oppression. Their persistent success in avoiding capture is a thorn in Superman's side. Batman joins forces with Lexcorp and with his parents' killer, Pyotr, now head of the KGB and consumed by jealousy of Superman, to attempt a coup. They capture Wonder Woman and use her as bait for Superman, hoping to sap his powers with rays that imitate the light of Superman's native sun. The plan works, but Wonder Woman breaks free and rescues Superman, although the process (which requires snapping her golden lasso) seriously injures her, snapping something inside her and causing her hair to turn instantly white. Batman commits suicide to avoid capture, but not before revealing to Superman that Pyotr had a role in the plot. Pyotr is then turned into a Superman Robot.

As the part ends, Luthor's third plan begins, when Luthor is given a mysterious green lantern found in an alien ship that crashed at Roswell. Batman has become a martyr for his cause, Brainiac is reprogrammed into Superman's aide, and the construction of a version of the Fortress of Solitude, here located in Siberia and referred to as "the Winter Palace", begins. The stage is set for the finale.

Retrieved from "https://heykidscomics.fandom.com/wiki/Superman:_Red_Son_Vol_1_2?oldid=1461046"
Community content is available under CC-BY-SA unless otherwise noted.