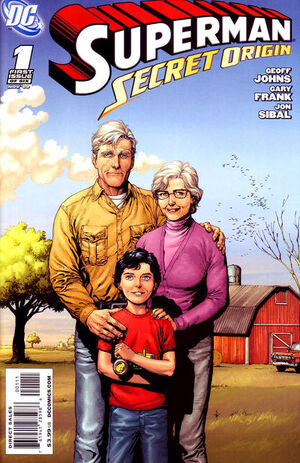 Appearing in "The Boy of Steel"Edit

Synopsis for "The Boy of Steel"Edit

Young Clark Kent is engaged in a football game with Pete Ross and a few other teenage boys. However, his powers lead to Pete Ross breaking his arm, and destroying the football. Guilt-ridden, Clark rides home with his farmer. Next day at school, when Pete asks Clark to sign his cast, Clark's powers let him see the break in Pete's arm, and he runs away. Lana Lang, Clark closest friend, follows him, as they talk about the day they discovered Clark's power when he saved her from the blades of a combine harvester. When Clark responds that he's afraid to touch people, Lana kisses him. However, this leads to Clark's heat vision activating, and he accidentally burns down the gym. Clark wonders what's wrong with him.

That night, Jon Kent decides to tell Clark the whole story of how he joined the family. They always knew he was special. Not just for who he is, or for his uncanny abilities. They knew because he dropped out of the sky in a silver rocket, and answered their prayers. Clark is initially overjoyed, until the rocket begins playing a recorded message from Jor-El. The Kryptonian scientist introduces himself as the father of Kal-El, last son of Krypton. He says that his powers will protect him in the environment of the planet Earth, but that he is not one of the Earthlings. Clark reacts with rage, but the ship is resistant to his powers. Clark runs across the field and breaks down crying. John catches up to him, and the two embrace.

Elsewhere in Smallville, a young read-headed man runs out of his father's house. He trips over a glowing green rock, and is enthralled.

The next day, the Kents have an idea: since the rocket is immune to Clark's powers, they make him a set of glasses from some of its crystals to block the heat vision. Martha Kent thinks it makes him look clever. Going back to the rocket, Martha sees some of the disasters that befell Krypton before its destruction, as well as catching a glimpse of day-to-day Kryptonian wear.

Clark avoids playing football with the other boys, for fear of hurting someone else. Lana suggests that he get better at lying, then asks him to help her set up her aunt's stall at the county fair. There, Clark meets the young red-headed man: Lex Luthor, who is selling off his books so he can get a ticket out of Smallville. Clark is interested in a book about aliens, but when Lex pulls out the green rock he found earlier, Clark faints, knocking over Lex and smashing the jar with the rock in it.

A tornado brews from nowhere, and although everyone else gets to safety, Lana is swept up. Reacting, Clark runs to her and jumps... and goes on jumping. He flies to her, rescuing her from the tornado. When she asks how he is flying, his power fails him and he falls to earth. The two land in a stream, and Lana kisses him. The glasses, he notes afterwards, contain the effects of the heat vision.

Clark is happy that he has found a positivity use for his condition, but Martha Kent is firm that he should wear something else if he is going to use his powers, or he will swiftly be without clothes. Using some sketches based on the Kryptonian clothing in the hologram, and the blanket he came wrapped in, she plans to make a suit for him to wear, but she needs his heat vision to help her sew it (since the impervious nature of the suit has so far resisted five pairs of scissors, a sewing machine and Jonathan Kent's chainsaw.

Once the suit is made, Clark comes down wearing it. Martha and Jon are impressed, but Clark is firm in the belief that he will never wear something this silly again...

Retrieved from "https://heykidscomics.fandom.com/wiki/Superman:_Secret_Origin_Vol_1_1?oldid=1529218"
Community content is available under CC-BY-SA unless otherwise noted.