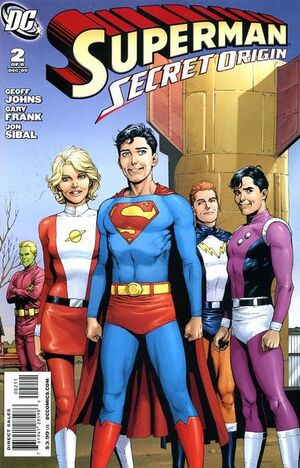 Appearing in "Superboy and the Legion of Super-Heroes"Edit

Synopsis for "Superboy and the Legion of Super-Heroes"Edit

Lionel Luthor careens down the road in a drunken stupor. He sees a pile of rubble too late, and his truck goes off a cliff toward water far below. He sees a red blur, and is saved from death by Superboy. The police ignore his crazy story. Lex Luthor gets the call that his father has been saved, and tells them to tow the truck back home. It is indicated that he sabotaged the brakes on the vehicle, from manuals sitting around his work area.

Clark comes back home by slipping through a secret underground tunnel. He tells his parents that he has been staying out of sight, mostly out of embarrassment about his uniform.

Clark looks to the skies with his Pa, sees into distant galaxies, and wonders if he's alone. He studies Dr. Erdel's book the next day, and Lex interrupts him in the process of researching Metropolis for the building Lex plans on constructing in the city.

After Lex tells Clark of his grand plan, Clark offers to hang out with Lex some time. Lex sneers at the idea.

Lana tries to console Clark over the fact that most of the kids are not hanging out with him, or that he's pushing them away. When Lana kisses him on the cheek his eyes begin to flare, and inadvertently he tells Lana that he only wants to be friends, and sends her off upset as well.

He hears the other kids poking fun at him, and is soon interrupted by three members of the Legion of Superheroes.

The Legion bend the rules to take him to the future. They fight a group of human supremacists. Brainiac 5 interrupts their revelry to remind them of the consequences of their actions. They talk telepathically and remind themselves to be careful not to reveal future occurrences, a few of which we haven't seen the story of, including the Earth/New Krypton war and the death of Lex Luthor.

They return Clark to the present and promise future adventures.

As Clark describes the future to Pa, a rocket approaches the house. Clark stops it, revealing the test rocket with Krypto.

Lex Luthor, in the meanwhile, watches as his father is wheeled away, dead of "heart failure." Lex is gleeful, given that with his insurance policy he can now go to Metropolis and leave Smallville behind.

Retrieved from "https://heykidscomics.fandom.com/wiki/Superman:_Secret_Origin_Vol_1_2?oldid=1517313"
Community content is available under CC-BY-SA unless otherwise noted.