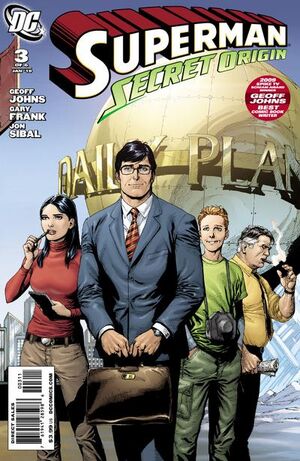 Young man, this is Metropolis. People here don't have the time to look up in the sky.

As Clark walks around Metropolis, awestruck, he encounters a citizenry that lives fast, cheap, and out of control. He comes up to the Daily Planet, a dilapidated building laced with graffiti. Inside he makes a point of catching his briefcase and spilling it in a subtle way. In the elevator he meets Rudy Jones, a janitor who says he has forgotten his lunch. Taking Cark for a coutry rube, Jones talks him into handing over his lunch.

At the main floor he encounters Ron Troupe, Steve Lombard, Cat Grant, and Jimmy Olsen, the whipping boy. He is mistaken for a bill collector and eventually makes his way to the Planet office, where Lois and Perry debate the merits of a story. Perry cites the fact that going after Luthor has nearly killed the Planet, and Lois fights back with the nobility of idealism.

Perry introduces Lois and Clark, and Lois offers to take Clark on a tour, which surprises Perry. She takes Clark to the Lexcorp building for the unveiling of a piece of technology, and sneaks in wearing a blonde wig by duping Clark to distract the guards.

At the top Luthor unveils his Metallo body suit, which Lois observes with interest as a potential machine of war. Security catches her, she flees, and then she trips and falls off the building.

Clark, hearing the ruckus, sneaks into an alley, puts his suit on, and saves her. People grab at him and he flees, fearing he's done the wrong thing unveiling himself to the world.

Retrieved from "https://heykidscomics.fandom.com/wiki/Superman:_Secret_Origin_Vol_1_3?oldid=1461059"
Community content is available under CC-BY-SA unless otherwise noted.