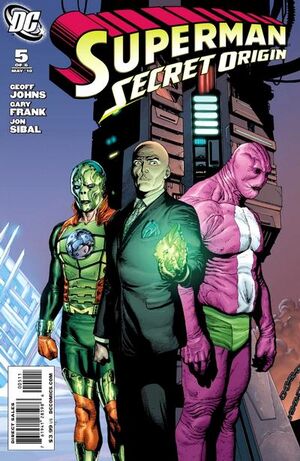 John Corben's one of the deadliest soldiers in the US Army, Clark. He's a heartless killer. I've never seen anyone stare him down before.

A fire in the Daily Planet's main warehouse almost takes a fatal turn that night, but people are saved by Superman. Public opinion is still wary of Superman, but it is beginning to turn. As he is about to fly away, he meets Lois Lane and Jimmy Olsen, who get some information for a story. The three voice the opinion that the fire is the work of a milicious. Jimmy wonders who it could be...

At his office, Lex Luthor is angry. The Daily Planet's referring to the caped hero as "Superman" has spread to other papers. Public opinion is turning in favour of the hero, and the Daily Planet's circulation has jumped by 700%, mostly due to their Superman coverage by Lois Lane. He has called in his government contact, General Sam Lane, Lois' father. Lane agrees to help in exchange for weapons technology, on the grounds of national security. Lex Luthor says he should be more concerned, and leads him into a secret lab to explain why.

At the Daily Planet, things are looking up. Lois is about to get to work, when she is greeted by Sgt John Corben, her father's choice for her future husband. Lois truies to break away, but John refuses to go away... unitl he is met by Clark Kent. Corben tries to bull Kent aside, but through a combination of oafish good humour and a grip like a steel vice, he sends Corben packing. Clark offers to buy lunch for Lois Lane, and she takes him up on it.

In Luther's secret lab, he reveals to Lane the theory that Superman is an alien. He also tells him that Superman can probably be stopped by the green glowing rock in Luthor's control, revealing that waste radiation extracted from the rock was responsible for the powers of the parasite. Hence, the new weapon - a battlesuit made of Lexcorp's proprietary Metallo alloy, powered by the rock, and piloted by none other than John Corben.

Over lunch, Lois Lane tells Clark about John Corben, who works for her father and whom he favours over Lois and her sister. Lane always wanted a son. Lois also reveals that she cannot remember her mother. When Clark tries to comfort her, she points out that Clark constantly shifts between two personae, one a bumbling fool and one a supremely confident man. An explosion on a skyscraper leads to Clark leaving complaining of an inner ear infection.

Flying to the scene as Superman, he meets General Lane, who asks him for an interview. Lane points out that while there have been previous reports of humans gaining extraordinary abilities, his office believes that Superman is not human. Superman explains that he grew up on Earth, considers himself an American, and wants to use his powers to be a productive member of society. Lane abandons the pretext that this is an interview, and demands to know what Superman can do, and what his interest in Lois is. Superman turns to leave, telling Lane that he is no-one's enemy.

Outside, Superman is accosted by soldiers, who fail to make any impact. However, the soldiers are soon backed up by Corben, who manages to weaken Superman in a pitched battle. As Corben reveals the glowing rock, Superman is weakened, but a ricocheting bullet hits the rock, creating an explosion which cripples Corben and his battlesuit.

Superman escapes as the soldiers rush to save Corben. Lex Luthor says he can save Corben. Soldiers led gby General Lane arrive at the Daily Planet, saying that they will shut down the newspaper until the get some answers about Superman.

And in the sewers below Metropolis, Superman sits... wounded...

Retrieved from "https://heykidscomics.fandom.com/wiki/Superman:_Secret_Origin_Vol_1_5?oldid=1461062"
Community content is available under CC-BY-SA unless otherwise noted.