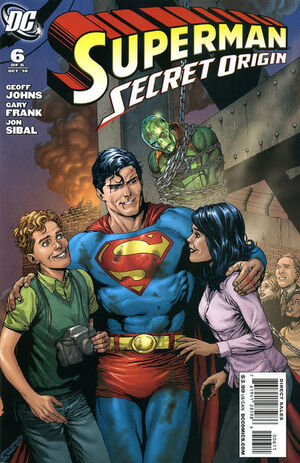 Lex takes John into surgery and replaces his heart with a kryptonite generator, turning him into Metallo. He runs off to a rematch with Superman.

Sam reveals to Lois, Perry, and the Daily Planet staff, that Superman is an alien, and that they have the kryptonite to stop him. While Jimmy distracts the soldiers with flashbulbs, Lois escapes to warn Superman.

Soldiers find Superman in the sewers. They battle him as he pleads with them to stand down, for the safety of the bystanders. Metallo enters the fight, and he begins to attack his own soldiers in order to get to Superman.

Lois arrives to warn him about the kryptonite and tell him to flee, but he refuses to give up. Metallo attacks him with a kryptonite ray, threatening the bystanders, but Superman melts a manhole cover over the kryptonite and flies Metallo into space until the lack of oxygen knocks him out.

Sam arrives and orders Superman and Lois arrested. The crowd turns on the Army, and Superman orders the crowd to stop, telling them that they, not the Army, not Lex Luthor, nor himself, are meant to be Metropolis's saviors.

Superman meets with Lex and tells him Metropolis doesn't belong to him: "You don't own us." Lex objects, since Superman isn't from Earth. Superman replies, "This is my home," and leaves. Later, Lex goes to pick another person from the crowd to give a new life to, only no one is there.

Superman visits Lois atop the Daily Planet building and thanks her for making him feel like he belongs there. He starts the Planet’s rusty globe spinning again. Lois asks, "Are you a man or an alien?" His response is, "I'm Superman."

Retrieved from "https://heykidscomics.fandom.com/wiki/Superman:_Secret_Origin_Vol_1_6?oldid=1461064"
Community content is available under CC-BY-SA unless otherwise noted.