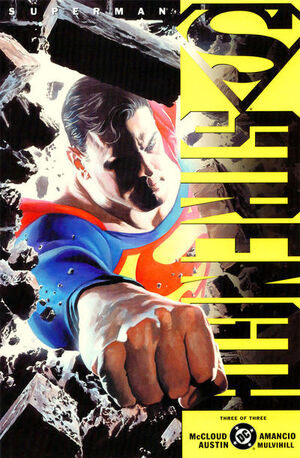 If you and your merry band of morons hadn't brought that infernal machine in here -- none of this would have happened!

Thanks to the efforts of criminal inventor John "Fido" Pollock, a wave of giant-sized pocket debris begins raining down on Metropolis. Superman flies out and deflects giant coins, fountain pens and paperclips from smashing through the city.

At Lexcorp Tower, Fido and his crew use their trans-locational gloves to escape before Luthor's security team can gun them down. They stop at another LexCorp facility to hijack a NASA hovercraft. Lois Lane is present and tries to sneak on board, but Fido captures her and uses her tech to shrink her down in size.

Superman arrives at the facility and his father, Jonathan Kent, tells him that the bandits have kidnapped Lois. Superman then takes off and flies after them.

He traces the crew to Cairo, Egypt. Fido comes up with another idea. Using the Trans-Locational Portal, he locates the imprisoned Metallo and steals a small piece of Kryptonite from his chest cavity. He intends on using to subdue Superman. When they realize that Superman is in range, they scramble into the hovercraft leaving behind one of their own, Hopper.

They open a dimensional portal to Chicago, but Superman is fast enough to follow them into the portal. They zigzag through the city, but eventually the Jet-Car runs out of fuel. By this point, Fido's cronies realize that there is no escape and they abandon him. While Superman rounds up henchpeople Trudy and Sulley, Fido hijacks a pick-up truck. Superman bears down on him, but Fido temporarily blinds him with one of the hi-tech weapons they stole from LexCorp.

Superman shakes off the effects, but Fido has one more ace up his sleeve. He enlarges the Kryptonite pebble he stole from Metallo and uses it to pin Superman to the ground. While Fido is boasting about his supposed conquest, Lois escapes from the vial she was trapped in and uses Fido's Scaling Gloves to return to normal size. She then uses the same gloves to reduce the Kryptonite block back to pebble size.

Through the course of this, Superman learns that Fido has always lived in the shadow of his abusive father, Frank "Pit Bull" Pollock – a man who once claimed to have broken Superman’s arm in combat. Superman slightly recalls the event, and tells Fido that his father never bested him, and certainly never broke his arm. Fido knows that Superman would never lie, and the sudden revelation drives him into a fury. He unloads on Superman with every weapon at his disposal, but they do no good. Once his arsenal is spent, Fido collapses to the ground and Superman takes him into custody.

Retrieved from "https://heykidscomics.fandom.com/wiki/Superman:_Strength_Vol_1_3?oldid=1461069"
Community content is available under CC-BY-SA unless otherwise noted.