Superman: The Day of the Krypton Man 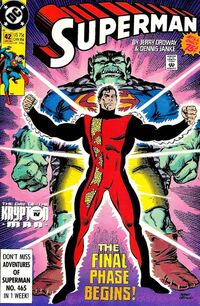 "Day of the Krypton Man" was a multi-part storyline published in alternating Superman titles dated from March to April of 1990. The story followed events that first took place during the "Exile" storyline, with Superman becoming possessed by the Kryptonian artifact called the Eradicator, and Maxima, Draaga, and Lobo all traveling to Earth to battle Superman.

Retrieved from "https://heykidscomics.fandom.com/wiki/Superman:_The_Day_of_the_Krypton_Man?oldid=1569915"
Community content is available under CC-BY-SA unless otherwise noted.