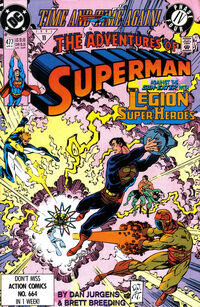 Time And Time Again! is the storyline that ran through the Superman title series in 1991 where Superman is found traveling through time, bouncing between the past and the 30th Century where he encounters three incarnations of the Legion of Superheroes. At the start of this tale, a time-traveling bounty hunter of sorts named Linear Man is seeking after Booster Gold to put him back in his own time. Superman intervenes and accidentally touches the Linear Man's controls, opening up a vortex that sucks Superman out of his own time and into the 30th Century. He discovers that exposure to powerful explosions or energy discharges can cause him to jump in time. Secretly, though, it is the Linear Man who is using the explosions to try bringing Superman to a point in time where a cataclysmic event could send him straight home. At the closure of the tale, Linear Man reveals that he has sent Superman to a point in the 30th Century where the moon was supposed to be destroyed in order to send him home. Seeing that the Legion has interfered by preventing the countdown of a destructive device implanted on the moon by the Dominators to destroy it, the Linear Man resumes the countdown and fulfills the moon's destruction, sending Superman back to his own point in time. Besides the Legion, Superman also encounters the Justice Society in 1943 (or is rather prevented from doing so by the Spectre) in addition to Chronos in the prehistoric age and Etrigan the Demon in the time of Camelot.

Retrieved from "https://heykidscomics.fandom.com/wiki/Superman:_Time_and_Time_Again!?oldid=1568456"
Community content is available under CC-BY-SA unless otherwise noted.