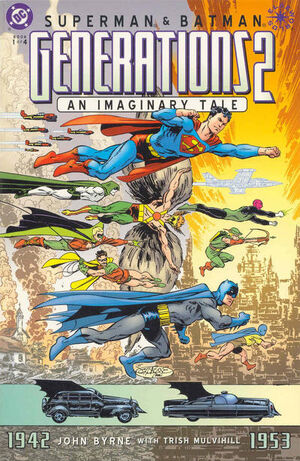 In Nazi-occupied France, the Blackhawk Squadron, Hawkman, Green Lantern (Alan Scott), and the Spectre are trying to stop a giant robot/tank. During the battle, Chuck of the Blackhawks sacrifices himself to prevent the destruction of a hospital. Superman arrives in time to pursue the leader, who reveals himself to be the Ultra-Humanite. He exposes Superman to artificially-created Kryptonite radiation, confirming his belief that Supeman is an alien, and escapes. On Themyscira, Wonder Woman (Diana) and Hippolyta discuss Diana's decision to travel to the outside world and Hippolya's reluctance to let her thousand-year old daughter go. In Gotham City, Lois Lane has tracked down the plans for the giant robot/tank and discovers that Lex Luthor is the mastermind. Luthor and his goons kidnap Lane, take her back to their base and attempt to kill her. While fleeing, they are pursued by the Batmobile. They make it to their second Gotham base where they have stashed Robin, the Boy Wonder. Robin slips his bonds and is battling the villains when one of them gives him an order - in Batman's voice! After Luthor is defeated, the henchman who spoke removes his disguise to reveal the cape-and-cowled Batman. He explains that he had infiltrated Luthor's gang in order to discover both secret bases and was responsible for guiding a remote-controlled Batmobile and allowing Lane and Robin to slip their bonds. Later, at the Daily Planet, Lois and Clark discuss the return of the Ultra-Humanite and that Clark has failed his military induction physical. (He inadvertantly read the eye-chart in the next room with his X-ray vision.)

On a cold February night, a battered James Gordon enlists the aid of Batman (Bruce Wayne) to stop the Head of the Demon, Ra's al Ghul. Batman relay the info to other members of the Justice Society of America; Atom, Green Arrow, Green Lantern (Alan Scott), Hawkman and Wonder Girl, a teen-aged magical projection of Diana. She has temporarily replaced Wonder Woman (Diana Trevor), who is in the late stages of pregnancy. On a planet in the Delta Vega star system, Superman (Clark Kent) searches for a way to escape with the cancer treatment he came for. Unfortunately, the planet is now occupied by hostile alien invaders and the local star is red, leaving him with no super-powers. Back on Earth, Lois Kent, who is near to giving birth to her second child, is visited by her sister, Lucy Olsen (nee Lane) and her new husband, Jimmy Olsen. In the Batcave, Alfred and Batman discuss Jim Gordon's condition, Gordon's grandaughter Barbara, and the circumstances of Gordon's "escape." Superman is able to create a signal that attracts the attention of the sector Green Lantern, Abin Sur, who proceeds to clear the planet of invaders. Over North Korea, Wonder Girl searches for the downed plane of Gen. Steve Trevor, the husband of her magical duplicate, who was shot down in combat. She find his horribly mangled body and flies off to Themyscira with the hopes that the Purple Healing Ray will be able to repair him as it did over a decade before. Abin Sur returns Superman to Earth and introduces him to Alan Scott, Earth's resident Green Lantern but not a member of the Green Lantern Corps. Diana Trevor and Lois Kent go into labor simultaneously and give birth to daughters at the same moment. Abin Sur and Alan Scott speculate on a connection between the two. Clark Kent arrives at the hospital and is introduced to his daughter, Kara. Unlike her brother, Joel, she has not been exposed to Gold Kryptonite and will eventually develop super powers. Diana Trevor, meanwhile, is informed by Wonder Girl that her husband is dead. Diana is comforted by the presence of her newborn daughter, Stephanie Trevor.

Retrieved from "https://heykidscomics.fandom.com/wiki/Superman_%26_Batman:_Generations_II_Vol_1_1?oldid=1460729"
Community content is available under CC-BY-SA unless otherwise noted.