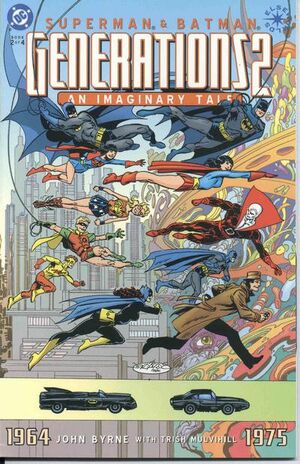 It is Halloween, and before Bruce Wayne and his wife go to Tony Gordon's party, the wife tells Bruce Wayne Jr. that he is not to be Dick Grayson's (Batman) partner Robin. In the Kent household, young eleven-year-old Kara adores the Supergirl costume that was made for her, while Joel Kent, secretly sulking, transports himself into the lab of Lex Luthor, whom he considers a "true father". Kara pays Bruce Jr. a visit, wearing a short-trimmed brunette wig electro-statically attached to her head along with her new Supergirl costume, which she alone can remove. She tells Bruce Jr. that though his mother may prevent him from being his "uncle Dick's" partner, nothing is stopping him from being Supergirl's partner.

Meanwhile, out on the streets of Gotham, Dick as Batman enters Barbara Gordon's apartment and finds her dressed up as Batgirl. They both test each other's skills at knocking each other over before spending some private time together behind a couch.

In Central City, Kid Flash is dealing with Weather Wizard, who is teamed up with Mirror Master using his holographic mirrors to make Weather Wizard appear in two different places in order to knock out the junior speedster while robbing a bank. Supergirl spots the activity below and drops down with Robin, with Supergirl inhaling the fog that Weather Wizard creates with his weather wand and then spewing it back out as water at the two criminals. However, the two young heroes are zapped by an electric stun gun by a third criminal, Gorilla Grodd, who is the brains behind the operation, admonishing Mirror Master and Weather Wizard for their "play[ing] kindergarten games".

Diana Trevor gets a phone call from Barry Allen, who is trying to find out where Wally West is, being two hours late from meeting with Barry. Diana's daughter Stephanie overhears the conversation and sneaks off to dress herself in the costume of her own superhero identity, Wonder Girl, before flying off. During her fly-by over Central City, Stephanie gets a tingling sensation passing over the warehouse district. She follows the sensation to a building where she sees Kid Flash, Robin, and Supergirl all bound up while Mirror Master arranges mirrors so that they could steal Kid Flash's and Supergirl's powers, transferring them unto one of the villains -- Mirror Master, Weather Wizard, and Gorilla Grodd -- as one of the test subjects. While the three argue as to which one will be the test subject, Supergirl breaks from her bonds and melts the mirrors with her heat vision, but is quickly laid low with an energy blast from one of Gorilla Grodd's weapons.

The three villains are quickly distracted by the appearance of Wonder Girl, who crashes through the window and frees the other two heroes. This gives Supergirl opportunity to fell Grodd with one single punch. Weather Wizard tries to zap Supergirl with his weather wand, but Kid Flash has taken it and knocks that villain out. Mirror Master tries to make a run for it, but Robin stops him cold.

As the four heroes go to call the police, they decide to give themselves a group name for how well they did together. Bruce Jr. suggests the Junior Justice Society, but Wally thinks of something even better than that -- the Justice League of America.

Bruce Wayne Jr. and Kara Kent, as Batman and Supergirl, find the Joker in a padded cell at Arkham Asylum, old, withered, and rather catatonic -- at least in his sedated state. In a videotaped recording, though, the two superheroes see Joker reacting rather fearful to somebody in the cell, despite the fact that there's no visible person present. In the Batcave, Kara uses her super-hearing to discern what the Joker said in an audio recording when he was being taken from Rock Island prison to Arkham Asylum -- she hears him saying, "Get away from me, Batman! I killed you!"

Suspecting something of a rather mystical nature that may be haunting the Joker, Batman and Supergirl pay a visit to Dr. Occult, who in turn contacts the spirit of the circus acrobat Boston Brand who is busy doing his meditations in the remote area of Nanda Parbat. He appears unto them in the form of his Deadman identity and follows them into the cell of the Joker, where he enters the madman's mind and finds, among the psychedelic cartoonish chaos that defines the Joker's mental landscape, a giant skeletal form of Batman who attacks the Clown Prince of Crime. Deadman tries to keep the giant skeletal Batman from killing the Joker inside his own mind, but only manages to buy the criminal a temporary reprieve.

Deadman exits the Joker to let the two Bruce Waynes know that it's the ghost of Dick Grayson -- the Batman that Joker had killed -- who's haunting him, and Bruce turns to the only one who can stop Dick from getting his revenge -- the ghost of his faithful butler Alfred Pennyworth. Soon, as Dick's ghost batters away at the Joker's form inside the villain's mind, Alfred shows up to reason with Dick, telling him that he wasn't trained to be a killer and that the Joker is too old and frail to be a danger to anyone. Dick realizes that he must let the Joker meet his eventual end in death as he embraces Alfred and joins him in peaceful rest in eternity.

With the final battle in the Joker's mind taking its toll on the villain's fading health, the Joker makes a request for the Batman to reveal who he was under the mask so he could die a happy man. Batman tells the Joker that, because of all the suffering he's caused over the years as a murderer, he's the last man that the Dark Knight would ever want to see die happy, and denies the request.

At the grave sites of Richard Grayson and Bruce Wayne Sr.'s parents, Bruce Jr. and Kara sense that Dick is now resting in peace, and Bruce Sr. senses that Alfred is now gone to a place from where there would be no return.

Meanwhile, test pilot Hal Jordan makes his final testing job for Ferris Aircraft and decides to accept an offer from a man named McMurtrey to become a congressman.

Retrieved from "https://heykidscomics.fandom.com/wiki/Superman_%26_Batman:_Generations_II_Vol_1_2?oldid=1460731"
Community content is available under CC-BY-SA unless otherwise noted.