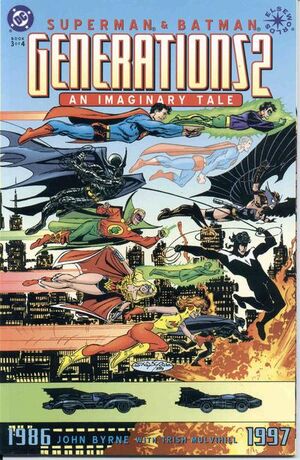 Superman breaks into a laboratory of the villain Lex Luthor (later revealed to be the Ultra-Humanite using Luthor's body for his mind to live in), who then shows the Man of Steel a holographic playback of Joel Kent killing Kara to torture his adversary. Then, to add further insult to injury, as Superman tries to grab Luthor, he reveals his form to be nothing more than a mere hologram, telling Superman he'll find him when he's ready to let his adversary find him. After seeing the hologram of Luthor disappear, Superman pounds the floor of the laboratory in frustration, having failed to stop the murderer of his family.

In the Batcave, Bruce Wayne Jr. gets an unexpected visit from his adopted son Clark as well as from his wife Mei-Lai (the widow of Superman's deceased son Joel Kent), with his wife trying to reach out to Bruce Jr., seeing her husband in torment. Bruce Jr. has his son go back upstairs and tells Mei-Lai there's no need for Clark to know that he is neither her son's father or that he is even Batman. Mei-Lai pleads for Bruce Jr. to promise that she will not have to bury him like she did her previous husband.

As Bruce Wayne Jr. goes out to capture the female criminal Hyena as Batman, he is chased after by both the police and by his fellow Justice League members Stephanie Trevor (who is now Wonder Woman) and Alan Scott (still serving as Green Lantern since his previous prospect of being his successor, Hal Jordan, chose to become a politician rather than a superhero), who now see Bruce Jr. as becoming unhinged following the death of his first wife Kara Kent. Bruce Jr. successfully eludes the police by using a turbo jump feature on his Batmobile, but ends up running into a brick wall built at super-speed by Carrie (presumably the daughter of Barry Allen), who prefers to be called the Flash. Bruce Jr. takes down Carrie by projecting a false image of himself while knocking her out from behind. No sooner after Bruce Jr. busts up the Hyena and her henchmen does Alan capture him in a green energy cage, which doesn't hold for long when Bruce Jr. covers Alan in a thick spray of wood chippings, nullifying his ring's power and allowing Batman to slap him away. Then Stephanie shows up, carrying the fallen Carrie with her and demanding for Bruce Jr. to surrender. Bruce Jr. throws a smoke cloud to blind Stephanie with, then handcuffs her wrists together in order for her to fight him with ordinary human strength. As Stephanie holds her own against Bruce Jr., she tries to reason with him that she understands the pain he felt losing Kara due to the psychic link she shares with Kara. Still full of rage, Bruce Jr. turns his attention toward fighting a weakened Alan, until Carrie tells him to stop because he's killing Alan, who's already using his power ring to keep himself healthy and active at the cost of his mind and body.

Seeing what he's becoming due to the rage he's kept inside and now has unleashed on even his allies, Bruce Jr. rushes home and collapses into the arms of Mei-Lai, confessing that he doesn't even know what he is anymore.

Bruce Wayne Jr. is ready and prepared to hand over the mantle of Batman to his adopted son Clark, who was serving as his partner Robin, as he is about to leave Gotham City in order to find his "father's killer". However, Clark has a surprise of his own for Bruce Jr. -- a new identity that he has chosen for himself called Knight-Wing as well as a new costume. While Bruce Jr. likes both the name and costume, he can only wonder why Clark would reject taking the Batman mantle. Clark answers that he knew from his adopted father's private conversations with his mother that only a true-blooded Wayne could ever become a Batman. Despite knowing he was only an adopted son, Clark still tells Bruce Jr. that he was the best father he could ever wish for.

In the White House in Washington, D.C., President Barbara Gordon is keeping both Alan Scott as well as Hal and Carol Jordan under protective custody while Kyle Rayner, Alan's successor as Green Lantern, along with the Flash and Black-Hawk track down Sinestro's whereabouts in the Rocky Mountains in Colorado. The villain with his yellow power ring has slain most of the Green Lantern Corps, and is now ready to do the same with Earth's Green Lantern. As the three heroes' search in the Rockies turns up nothing, Sinestro appears from out of nowhere to defeat them easily.

In Gotham City, Knight-Wing is testing out the hover abilities of the new Batmobile when he sees an explosive discharge of energy blasts up ahead. It is Ransak, a high-tech armored mechanoid that was operated by Douglas Mason the last time Clark as Robin tangled with it. However, as Clark finds out while dodging the robot's energy blasts, it is not Douglas who is operating it, as he is still in prison. Rather, it is his daughter Amanda, who seems to be operating Ransak as if she was a kid playing with a new toy, who was no more than twelve when her father was sent to prison. During the struggle, Superman watches from within the Phantom Zone, being taunted by the Kryptonian inmates already in there about his "misplaced faith" in the "aliens" he has chosen to live among and even protect. As Ransak is about to deliver the killing blow on Knight-Wing, she is distracted by the phantom appearance of Superman, which gives Clark enough time to short out Ransak's systems with live power cables, rendering Amanda unconscious.

In Washington, D.C., things take a turn for the worse: Sinestro has followed Kyle, seriously injured from his confrontation with the villain, all the way to the White House, where he cries out for Alan to take the ring. Alan, however, is too old and not in the best shape to retake the power ring -- and is easily knocked down by Sinestro's ring. Hal takes up the ring and uses it against Sinestro, who is surprised that an "unskilled novice" like Hal could easily overpower his own ring's energy where other Green Lanterns couldn't. Hal realizes that the real weakness of the Green Lantern's power ring isn't wood (as in the case of Alan's) or yellow objects (as in the case of Kyle's), but rather the limit of the user's will. The Guardians of the Universe realize that Hal now knows this information and offers him the opportunity to become a Green Lantern and to help rebuild the Green Lantern Corps. Carol tells her husband that he's almost seventy years old. Hal knows that the power ring can restore his youth, but whether he chooses to do so or not is not something he would jump into without a lot of thought.

Back in the Phantom Zone, the other inmates are amazed of how Superman was able to make contact with the universe beyond, as none of them were able to do. Superman simply answers that it was all a matter of will, a power that he has been honing to the maximum all through his life, and while it only lasted for an instant, sometimes an instant is all it takes.

Retrieved from "https://heykidscomics.fandom.com/wiki/Superman_%26_Batman:_Generations_II_Vol_1_3?oldid=1460733"
Community content is available under CC-BY-SA unless otherwise noted.