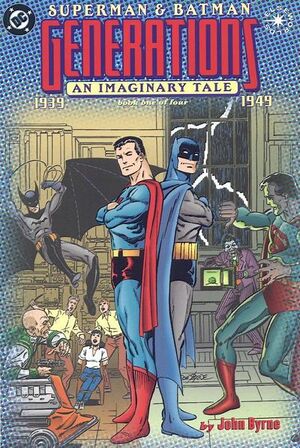 Take this as a warning, in fact; if you are a diehard continuity buff STOP READING NOW! GENERATIONS, we guarantee, will only hurt your head!

Bruce Wayne and his "honey," Julie, arrive via private auto-gyro at the Metropolis World's Fair only to be caught in the path of Electrox, a mechanical man on a rampage. Electrox has been taken over by the Ultra-Humanite, a frail old man in a wheelchair who is nevertheless a ruthless criminal mastermind. Just before Julie is crushed, Superman arrives and stops the primitive robot.

Later that night Wayne, in his guise as The Bat-Man, searches for clues at the Fair and encounters Daily Star reporters Lois Lane and Clark Kent (the civilian disguise of Superman). A piece of metal alloy discovered by Lane leads to an altercation that night and a convergence the next day of Lane, the civilian Wayne, and the Ultra-Humanite's henchmen. Lane is kidnapped, but Wayne is saved by the intervention of a young circus acrobat named Dick Grayson. The Bat-Man later locates one of the henchmen and coerces the location of Ultra-Humanite's hideout from him, with some unexpected help from Superman. The two mystery men invade Ultra's HQ, which is hidden under the World's Fair, but the bad guys make their escape in a rocket ship built into the Pyramax. They start the countdown on a bomb hidden in the Hyperglobe, but Superman is able to throw the globe at the fleeing rocket and "kill two birds with one stone!"

A very pregnant Lois Kent has been kidnapped by the Joker, who says that he knows Superman is Clark Kent. Superman bursts in and the Joker opens a lead-lined safe to reveal Kryptonite. Superman is seemingly weakened, but quickly shows he's unaffected and is shot in the back by Lex Luthor. Lex pulls off a mask to reveal the cowled Batman.

Flashback to the Batcave, 24 hours prior:
Alfred and Batman are discussing Dick Grayson's imminent departure for college while the Bat-Signal awaits a response. Dick appears dressed as Robin and the two answer Gordon's call as a team for the last time. Tony Gordon, Jim Gordon's son, has replaced his father as Police Commissioner (with the endorsement of Batman). He informs them that the Joker, though "it's been four years since we thought he died in that nuclear blast," has been seen at a robbery at the Metallurgical Institute. Initially puzzled because the Joker is only interested in wealth and the institute had no precious metals, Batman believes he's found the answer and a connection to Superman. Batman and Robin take the Batjet to Metropolis where they meet up with the Man of Steel.

Back to the present:
Superman is creeping Robin out by mimicking Luthor's voice as they watch the scene from a nearby rooftop. Superman starts to go in, despite the danger from the Green Kryptonite, but Robin has another plan. The two villains relate to Lois how Luthor freed the Joker from the Siberian labor camp where he had been imprisoned after being captured from Nazi Germany, all so the Joker could steal something even more rare than Green K. Just then Superman enters, hovering above the floor, and announces he'll allow Luthor to do what he wants if Lois is freed. Luthor gloats while Joker drags Lois behind a lead shield, ostensibly to protect the unborn child. Just as Luthor is about to open a second lead-lined safe that contains Gold Kryptonite, stripping Superman of his powers forever, a heat vision blast melts the safe into slag. The real Superman shows himself and the second Superman rips off his disguise to reveal Robin. Joker gets knocked out by Batman, who was secretly saved from the bullet by Superman. Luthor uses the Greek K against Superman and attempts to escape in a rocket which blows up, much as happened the first time Luthor encountered the world's finest heroes.

In the aftermath, Superman explains to Lois that the elaborate hoax was needed to flush Luthor out of the honeycomb of lead-lined tunnels and trick him into deactivating traps on the safes. Unfortunately, they realize that the baby didn't react to the Green K because he had already been exposed to the Gold K, permanently realigning his DNA and rendering him human. To spare him the psychological damage of growing up the human son of Superman, Lois and Clark decide to keep Clark's secret from him forever.

Batman and Robin return to Gotham, where one year later, Alfred is tending bees and reminiscing about Bruce's wedding six months earlier. His new bride appears and announces she has something to tell Bruce while holding some knitted baby booties.

Retrieved from "https://heykidscomics.fandom.com/wiki/Superman_%26_Batman:_Generations_Vol_1_1?oldid=1489999"
Community content is available under CC-BY-SA unless otherwise noted.