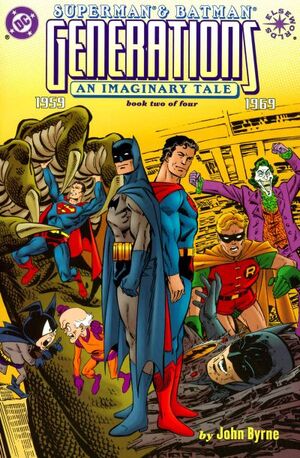 Batman has followed a wooden building in Gotham City that has somehow sprouted legs. Setting his Bat-Gyro on auto-pilot, he lassos the building and rides it like a bucking bronco, trying to get it to calm down. After he does, he calls out to the one he believes is responsible for this trick -- Bat-Mite. To his surprise, Mister Mxyzptlk shows up, revealing himself to be the one responsible.

Meanwhile, Jimmy Olsen uses a special mind-communicating machine to get Superman, now turned into a green giant due to exposure to Red Kryptonite, to put down an ocean liner he has in his hands. Soon the Red Kryptonite effect wears off, and he is back to his normal self. Superman greets Jimmy gratefully on the Daily Planet helicopter roof when Bat-Mite shows up.

They both explain why they now appear to each other's heroes: a couple of space pilots from Epsilon Eridani have taken both imps from their home dimensions to help find a suitable champion that would defeat the Bortan, an alien race that has destroyed many Eridaniites and enslaved the rest. Seeing the great superheroes of Earth in action, particularly Superman and Batman, two Eridainiites were chosen for the mission of contacting them, and so they used their technology to bring the two imps on board, knowing how capable they were in testing their own champions' abilities. They were now to test the other's champion so that the Eridaniites would know which superhero they should take back home. To prove that neither hero has a choice of backing out, Bat-Mite proceeds on making a giant green monster from a billboard in Metropolis come alive, while Mxyzptlk makes a giant menacing robot appear in Gotham City.

At home in the Kents' residence, Lois Kent deals with her young daughter Kara finding herself floating a few inches off the ground, which is scaring her. Lois finds a special red amulet that emits red solar radiation that she puts around Kara's neck, enabling her to live a normal life. Over at the Wayne Estate, Alfred the butler finds his master's son Bruce Wayne, Jr. testing out his Uncle Dick's Robin costume and doing workouts in the Batcave in the hopes that he will someday become the Boy Wonder.

As both Batman and Superman struggle with the giant creatures created by the two imps, Superman finally decides to transport both the imp and his monster to Gotham City, where the two monsters end up struggling with each other. Mxyzptlk decides to create an even bigger monster, one that spews flames from its tentacles, as a last-ditch effort for either Superman or Batman to be chosen. Batman is prompted to flee on his Bat-Gyro, but Bat-Mite grabs the flying vehicle, causing Batman to almost be toasted by the giant creature. Superman comes to his rescue, only for both of them to be knocked flat to the ground where they were both crushed. As both Bat-Mite and Mxyzptlk argue with each other over how "brilliant" each other's creation was, the Eridaniites hover overhead and decide to take the two imps back home with them. As they depart, the monsters vanish, and Superman and Batman arise safely from the impact zone, grateful that the aliens fell for the ruse of their playing dead, and grateful for Superman's split-second timing.

Soon after, Lex Luthor appears unto young Joel Kent to tell the lad something.

President Richard Nixon calls the assembled heroes, Superman, Batman, Wonder Woman, the Flash, and Green Lantern, to do something about the picketers outside the White House protesting the Vietnam War. They vocally refuse to, stating that the people have a constitutional right to protest. The President then demands them to stop the war, but Superman says that the issue isn't black-or-white. After being demanded to leave, Superman talks to Batman (who is now Dick Grayson) about Bruce Wayne, Jr.'s decision to retire his identity as Robin to be enlisted as a soldier in the Vietnam War as well as his own inability to contact his son Joel Kent ever since he went off to war.

At the grave site of Alfred Pennyworth, Bruce Wayne communicates with the ghost of Alfred his own thoughts concerning his son going off to war as well as those about Batman being too comfortable as a public image to be fear-inducing as it once was. Alfred tells Bruce that there are greater fears in the world to worry about, which is why the people need something that they can rely on, such as the Batman.

Meanwhile, Bruce Wayne, Jr. is helping as Robin to crack the case of the "Joker, Junior", whom the Joker claims is neither his son nor a trained protege despite being able to elude the police for years. Both he and Dick are frustrated as their last attempt to ascertain the identity of "Joker, Junior" from the Joker himself proved fruitless.

In Metropolis, Lois Kent learns that she now has cancer, which startles the teenage Kara who is just starting her superheroic career as Supergirl. She tries to assure her mother that her father will find a way to cure her, but Lois already knows the various attempts Superman has tried for cures to diseases were all failures, all of them from alien worlds that only worked on alien physiology. Lois feels resigned to her fate to die and tells Kara not to talk anymore about it as she flies her mother back home.

In Southeast Asia somewhere near Vietnam, Joel Kent's troops got lost and are beginning to worry that their commanding officer has led them to where they could be ambushed when Joel reappears, stating that he has found a possible village that's hiding Viet Cong troops. Though they lay waste to the village, the troops find no possible evidence for any troops being there and so beg for Joel to order a retreat. Ignoring the request, Joel decides to massacre the survivors in order not to let their "Commie masters" know that the U.S. troops have been there. One of Kent's soldiers realizes that this has gone far enough as he cocks his pistol, ready to fire.

At the Batcave, as they receive a clue from "Joker, Junior" about paying an old lady "of many facets" a visit, Bruce Wayne, Jr. suggests his also going disguised as Batman in order to cover more ground, but Dick Grayson and Bruce Wayne nix the idea, saying Dick and Bruce, Jr. should simply separate and find out what else they can shake out of the Joker. Dick as Batman follows the clue to the Gotham Diamond Exchange building, where he believes "Joker, Junior" is going to strike, while Bruce Wayne, Jr. as Robin visits the Joker in his jail cell again, only to find a dummy lying under his blanket, a make-up kit hidden under a table, and plans to the Diamond Exchange which include things that weren't included in the original blueprints. Realizing that those new additions could put Batman in danger, Bruce Wayne, Jr. quickly races to the Diamond Exchange.

Meanwhile, Dick Grayson as Batman tries to hide out in wait for the "Joker, Junior" to steal the valuable diamond on display at the Exchange when a trap door opens into a narrow shaft lined with razor-sharp blades. Dick falls down the shaft, sliced all the way to the bone, and lands on a cushion in front of "Joker, Junior", who explains that he has owned the building for ten years -- six years longer than he's been operating in Gotham City. "Joker Junior" then reveals that he has lined the blades with a blend of hallucinatory drugs, with effects that kick in just as Batman tries to fight the Clown Prince of Crime. The Caped Crusader then falls into a giant pie, where he thinks he sees the meringue attacking him -- but is actually a nest of machine guns emerging from other pies to shoot him dead.

Bruce Wayne, Jr. as Robin reaches the Exchange just as he hears the gunfire going off, and so rushes down the stairs in the hopes that he will save Batman, but it is too late. As the police waiting outside finally enter the building, "Joker, Junior" peacefully surrenders himself to them, taking off fake facial hair and a wig to reveal himself as the original Joker, now proud that he has accomplished his life's task of killing Batman. But his victory is short-lived when Bruce Wayne, Jr. emerges as Batman, carrying the dead body of Dick Grayson in Robin's costume, saying that the Joker didn't kill Batman -- he killed Robin.

At the funeral for Dick Grayson, Bruce Wayne, Jr. now contemplates on whether he should go to Vietnam or stay in Gotham to be Batman as the city now needs Batman more than ever. He decides to let his father have influence to keep him out of the war. Clark and Lois Kent advise Kara to finish college before she pursues a career as a superhero alongside Bruce, Jr. As the Kents return home, Lois finds a telegraph waiting for them. She is in shock when she reads that Joel Perry Kent is reported as killed in action.

Retrieved from "https://heykidscomics.fandom.com/wiki/Superman_%26_Batman:_Generations_Vol_1_2?oldid=1460739"
Community content is available under CC-BY-SA unless otherwise noted.