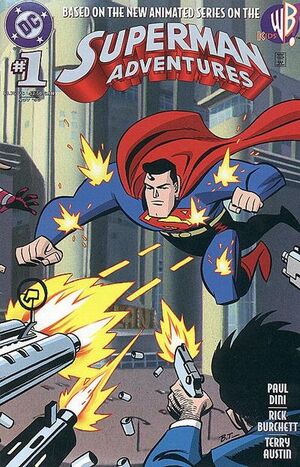 Appearing in "Men of Steel"Edit

Synopsis for "Men of Steel"Edit

In the streets of Metropolis, Superman battles a terrorist named John Corben, who has stolen a Lexcorp battlesuit known as the Lexo-Skel 5000.

At the Daily Planet, Perry White wants everyone to find out as much information as they can about this new "Superman" that has been active for the past several days. Everyone gives their first impression of the Man of Steel except for Clark Kent, who appears to be paying little attention.

Later, Lex Luthor recovers his stolen battle-suit and redesigns it as an unmanned unit that physically resembles Superman. He then sends it to attack the Kaznian embassy. The Kaznians had agreed to purchase the technology, but as the suit was stolen by Corben, they refused to make the payment. Luthor sends the robot to the embassy to "settle the account".

Not long after, Clark Kent hears reports of Superman attacking the Kaznian embassy. He changes into costume and flies off to investigate the impostor. After a protracted battle, Superman finally defeats his robotic duplicate, and brings the salvaged remains back to Lexcorp. He crushes it into a ball and drops it on the desk of a furious Lex Luthor.

Retrieved from "https://heykidscomics.fandom.com/wiki/Superman_Adventures_Vol_1_1?oldid=1460764"
Community content is available under CC-BY-SA unless otherwise noted.