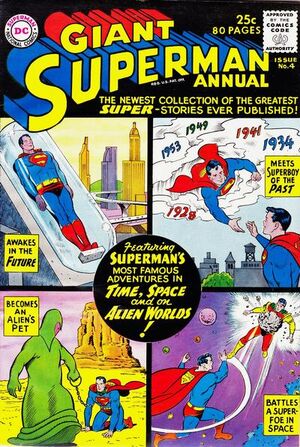 Appearing in "A Doghouse For Superman"Edit

Synopsis for "A Doghouse For Superman"Edit

Appearing in "The Alien Who Conquered Superman"Edit

Synopsis for "The Alien Who Conquered Superman"Edit

Appearing in "The Bride of Futureman"Edit

Synopsis for "The Bride of Futureman"Edit

XL-49, an employee of the Library of Superman in the 30th Century, is sent back in time with super-powers which he has acquired from the science of his era in order to learn whether or not Superman and Lois Lane married. When he finds that they have not yet wed in the era in which he emerges, he takes on the secret identity of Futureman and tries to woo Lois in order to make Superman jealous and get him to propose to her. The plan doesn’t quite work out, but Lois is convinced that Superman secretly loves her.

Appearing in "Outlaws of Krypton"Edit

Synopsis for "Outlaws of Krypton"Edit

Appearing in "The Boy Who Killed Superman"Edit

Synopsis for "The Boy Who Killed Superman"Edit

A bizarre accident transports Jimmy Olsen forward through time to the 60th century. In this era, Jimmy is regarded as an infamous villain, and the man who actually succeeded in killing Superman. Jimmy is on the run, but the police apprehend him and send him back to the 20th century. Jimmy finds Superman and warns him about what he has learned. Superman reveals to him however, that his predicted death at Jimmy's hands is actually part of an elaborate setup to bait some criminals into a trap.

A cyclotron accident in which Kryptonite is involved puts Superman in a coma. He is placed in a tomb, and sleeps until the 30th Century. Upon awakening, he learns that “vitamins and hormones” have given all Earth people powers similar to his own. But the people of Earth are overly-dependent on robots to do their work, and fall prey to a villain named Drago. Superman rallies the people of the 30th Century to defeat Drago. As repayment, two men of that time send Superman back to his normal era with an experimental time machine. He awakens in his glass tomb only minutes after he had been placed in it.

Appearing in "Menace From Planet Z"Edit

Synopsis for "Menace From Planet Z"Edit

Retrieved from "https://heykidscomics.fandom.com/wiki/Superman_Annual_Vol_1_4?oldid=1460806"
Community content is available under CC-BY-SA unless otherwise noted.