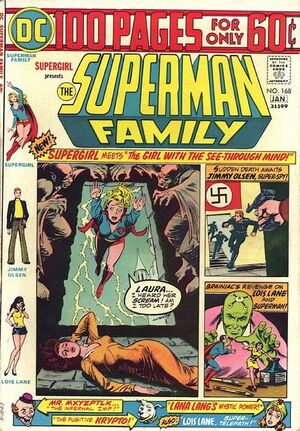 Appearing in "The Girl with the See-Through Mind!"Edit

Synopsis for "The Girl with the See-Through Mind!"Edit

When genius-level student Jan Thurston exhibits marked ESP abilities in an experiment conducted by psychic Lena Thorul-Colby on a visit to New Athens Experimental School, she rushes away and, against her will, tries to commit suicide. Supergirl rescues her from each attempt. When Supergirl, Lena, and Jan investigate, they discover that Jan is an empath, able to absorb and destroy others' pain. Also, she has been terrified by visions of evil at an old house. Supergirl discovers she has been in psychic contact with Shari Jones, a woman whom sorcerer Don Romero has been trying to induce mystically to commit suicide so that he can steal her life-force and lengthen his own life-span. With the help of Jan's empathic abilities, Supergirl fights and defeats Don Romero, rescues Shari, and sets Jan free of her horrific visions. Later, Shari applies for a job teaching at New Athens, and Linda writes a recommendation for her.

Appearing in "The Fugitive Krypto"Edit

Synopsis for "The Fugitive Krypto"Edit

Appearing in "The Infernal Imp"Edit

Synopsis for "The Infernal Imp"Edit

Retrieved from "https://heykidscomics.fandom.com/wiki/Superman_Family_Vol_1_168?oldid=1460893"
Community content is available under CC-BY-SA unless otherwise noted.