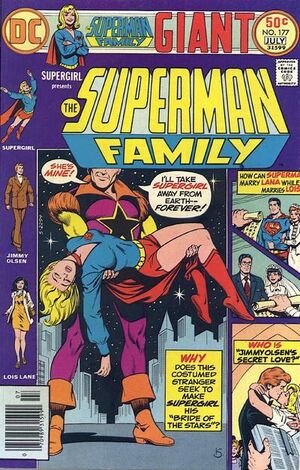 Appearing in "Bride of the Stars"Edit

Synopsis for "Bride of the Stars"Edit

Ranar, a super-powered alien of the Hakawee, was born at the same instant as Supergirl. Throughout his life, he has searched for the woman the astrologer has told him will make him not only a perfect wife, but whose powers, siphoned into his body, will enable him to rule the universe. He finally catches up to Supergirl on Earth, who battles him for a time until she

realizes his powers could devastate Earth. Supergirl pretends to yield to him, but leaves briefly and, with a meteor, eclipses one of the stars by which Ranar makes astrological decisions. Since the stars appear to be against their marriage, Ranar calls the wedding off.

Appearing in "When Lois and Lana Were Brides"Edit

Synopsis for "When Lois and Lana Were Brides"Edit

Retrieved from "https://heykidscomics.fandom.com/wiki/Superman_Family_Vol_1_177?oldid=1460912"
Community content is available under CC-BY-SA unless otherwise noted.