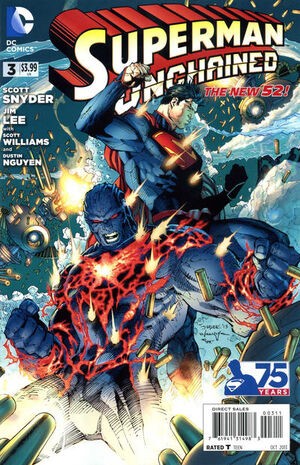 What I don't like about you, Superman, what gets me right here in my damn throat, is that you're a coward.

In 1938, the US sent a prayer into space, and 11 seconds later, it was answered. Now, Superman slumps, weakened by a blast from General Sam Lane's advanced weaponry, and a fight with a super-human being whom Lane has been keeping secret in a facility hidden deep below the Utah Salt Flats. Though Superman had only intended to talk to Lane, the General's tack is much more aggressive. Superman reluctantly meets the challenge, until the other super-human stands in his way. Superman ignores his warnings to stand down, and ends up getting kicked across the state.

Lois Lane, meanwhile, is attempting with some difficulty to perform an emergency landing from airspace over Nova Scotia. A terrorist organization called Ascension has sabotaged the plane with an EMP device, and all of their controls are fried. She hopes desperately that by crashing the plane through an array of power-lines and into the ocean, they will attract attention and help by knocking out the power on the grid. The shock sets the cockpit on fire, but it doesn't matter, because soon, they are crashing hard into the icy Atlantic waters.

The "prayer" that was sent up in 1938 was actually a mathematical equation in which the final sum added up to more than the sum of its parts. This was meant as a message to say that together, whoever got the message could help both parties become greater. They had not expected the prayer to be answered so soon. A ship crashed down onto the planet's surface and its passenger became the start of something.

Sam and the alien take Superman down into the facility, though the General is wary of doing so. The alien admits that he would like Superman to consider him an ally, because - though Superman wasn't aware of it - they have fought side-by-side a number of times. The alien introduces himself as "Wraith," an acronym for "William Rudolph's Ace In The Hole." Rudolph was the general who recovered his spacecraft and convinced President Roosevelt to set up the facility 75 years ago. Lane explains that the facility was set up to understand and implement the equation that Wraith brought with him to Earth in response to the one that Earth had sent out. However, its mission became somewhat more aggressive, and Wraith was deployed as a secret weapon after some time, collecting trophies from each mission. Lane admits that his department is not beholden to the government, and acts on its own impulses.

Superman distrusts Lane's absolute control, and the General responds by drawing his attention to a map. On it, large red patches denote "danger spots" that could affect the free world. In 1938, the map was covered with them. By 1966, the areas had shrunk significantly. Now, the areas are smaller and scattered - in other words, the facility and Wraith have essentially created the safer world that they now live in.

Superman attempts to comment that the public would not stand for this, and Lane responds angrily that it is time to air his primary issue with Superman. It's not that he's an alien - after all, so is the Wraith. It's not because he's powerful - the Wraith is more powerful. What Lane doesn't like about Superman is that he's a coward. From Lane's perspective, Superman is a murderer whose cowardly decision not to interfere in world affairs by removing despots from power and preventing genocide places the responsibility for every death which results on his shoulders.

The General's tirade is interrupted by a message that Ascension has accessed a fleet of Soviet drones, and are headed towards Japanese airspace. Though there is no indication of just how dangerous these drones are, Superman and Wraith are determined to intervene, though he warns General Lane that their discussion is not yet over.

Meanwhile, in Metropolis, Lex Luthor has escaped from his detention facility by uploading his consciousness into a robotic suit, and breaking out. He hurries away, knowing that he's got someone to meet very soon.

In the cold waters of the ocean, Lois desperately tries to break through the windows of the cockpit so that they can escape the rapidly flooding plane. The water crashes through the weakened glass and they are submerged, but Lois' hope is revived when the plane's controls suddenly come back to life. The propellers begin spinning again, forcing the plane back up to the surface of the water, and returning air to the cockpit. Lois ushers the other passengers out the door, and is surprised to find the very man she had come to Nova Scotia to interview levitating on the shore, and holding a radiating crystal.

In Tokyo, Superman and Wraith soon spot the drones, and attempt to draw fire away from the downtown area. Side by side, Wraith admits that he has been looking forward to this moment, which is a shame, considering that he must now kill Superman.

Late at night, Jimmy Olsen struggles to convince a restaurant to stay open long enough for him to order some pad thai so he doesn't starve. Successful, he prepares to rush down to pick up his order, but his eye is caught by a shadow at his window. Thinking it might be Superman, he is horrified when it is Lex Luthor instead. Luthor grabs him up in his robotic arm, and states that it might be time Jimmy tried being his pal for a while.

Retrieved from "https://heykidscomics.fandom.com/wiki/Superman_Unchained_Vol_1_3?oldid=1461063"
Community content is available under CC-BY-SA unless otherwise noted.