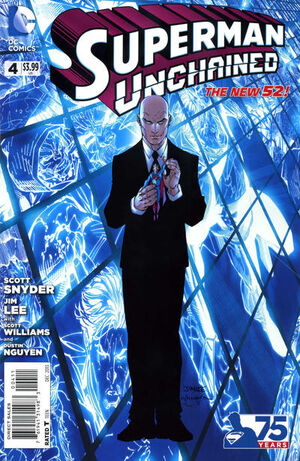 Lex Luthor has got Jimmy Olsen trapped in his lab, and he taunts the young man by musing about the possible deaths that will befall the heroes that Jimmy has come to worship. Superman in particular, though, will have a death that Lex can predict accurately - and in a few minutes, Jimmy will experience just how that death will come about.

Meanwhile, in Tokyo, Superman and Wraith are battling with Russian-made robotic drones, whose weapons have the surprising ability to pierce Superman's skin. Wraith explains that the bullets these drones fire are emitting a low-frequency red solar radiation before impact. It appears that the weapons were designed solely to kill him.

In Nova Scotia, Lois Lane approaches the man who had saved her life following a plane crash caused by the terrorist group called Ascension - of which he is thought to be a member. He calls to her by name, demanding that she take from him a radiating crystal. Weakening, he coughs that the shard is the key to everything. and she must tell the world the truth about it. He warns that though Superman will think it is like his native planet's Sunstone, it is something far worse and more dangerous. She has been chosen to hold it because Superman himself will not be alive much longer to receive it.

With Ascension taunting them, Superman decides it's time to take the fight to the drones, rather than letting them tear through the city - despite his wounds. Ripping off a section of an armoured truck for protection, he speeds to through an oncoming drone while Wraith thrusts it into the sea. Unfortunately, more are on the way. Knowing they can't fight them one at a time and survive, Wraith suggests that they combine two attacks: He will produce a sonic blast that will disrupt their shields so that Superman can unleash a rapid-fire burst of heat-vision.

The method is successful, though Clark wonders how Wraith created his sonic blast. Wraith explains exactly how, pointing out that eventually Superman will learn how to do it, along with several other abilities. In truth, he has not yet learned of every ability that he has access to. However, he warns that one day, Superman will have learned to do such terrible things that he will cross a line, and that will be when they send him to kill him. Clark begins to wonder just where Wraith comes from, but his questioning is interrupted by a call from Perry White who is concerned about Jimmy's absence and Lois' plane crashing over the Atlantic.

The man desperately leads Lois away from the crash site, warning that Ascension is not what it seems to be. Lois is reticent to leave her injured flight crew to die on the shore, but she spots an ambulance on its way. Attempting to flag it down, she is surprised to see that no one is driving it. The man thrusts her out of the way as he takes the full force of the speeding vehicle. Though he survives it, he is worse off than before, and warns that she must take the shard before he dies and there is no other choice. She must hide it. Focused instead on getting him help, she asks where she can find Ascension. Grimly, he answers that they are right behind her. Turning, she sees that she is surrounded just before taking the butt of a rifle to her head.

Slyly, Luthor explains that, for a while, he had thought that it was he who would have the honor of killing Superman, but he has come to accept that he was wrong. Still, the real answer comes as a shock to Jimmy: the one who will kill Superman is him.

Lois Lane wakes in a darkened basement to the sound of Superman's voice. He explains that he couldn't stop Ascension, but the truth is that he is not there at all. Each member of Ascension is wearing a mask capable of mimicking another person's face. Annoyed by the trick, she demands to know what they want with her. They respond that she is very important to them - like family, even. After all, the same man who made them made her: General Sam Lane.

Retrieved from "https://heykidscomics.fandom.com/wiki/Superman_Unchained_Vol_1_4?oldid=1461066"
Community content is available under CC-BY-SA unless otherwise noted.