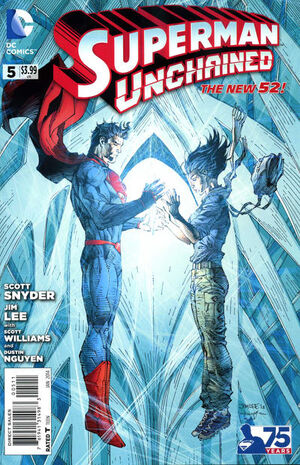 You're living in a place between. Don't you see that? A limbo that can't last. As Superman, you live outside the law by choice, and as your human counterpart, you do so by nature.

Appearing in "A Place Between"Edit

Synopsis for "A Place Between"Edit

Years ago, Clark Kent and his friend Lana Lang were carrying out their annual ritual of jumping from the top of old man Colder's grain silo into his haystacks. On this particular occasion, though, Lana lost her footing, and Clark was sure they would miss the haystacks and die. Instinctively, he pulled Lana into his arms, and she lost consciousness. Clark closed his eyes, bracing himself for the fall that never came. He opened his eyes, and realized that he was floating with Lana in mid-air.

Now, Clark is Superman, and he and Wraith are in Nova Scotia searching for Lois Lane, who has gone missing while investigating a terrorist group called Ascension. Fortunately, Wraith spots a strange pattern in the air that suggests that Ascension may be in a seaplane or boat. Superman suggests they go to his home to scan for it.

Deep in the Atlantic Ocean, Lois has been captured on Ascension's submarine. They have claimed that her father, General Sam Lane is responsible for Ascension's creation, but she doesn't believe it. Their leader responds that General Lane is one of a number of men whose actions made Ascension both possible and needed; traitors all. Their traitorous act being the command over the organization known as the Machine.

The Machine, they explain, is a secret military branch formed in 1938 when an alien race first made contact with earth by sending its envoy with an equation embedded in its ship. The equation was of a geological nature, explaining how to exploit earth's minerals for technological advancement. Since then, the Machine has used the equation and the alien to chart the country's course. Ascension was created to chart a new course.

Lois demands some proof that they haven't made it up, and the leader reveals his identity, claiming that his lineage as the grandson of the man who founded the machine ought to be proof enough. He is Jonathan Rudolph, and his grandfather William told him much about the Machine while in his senility. One of the secrets he had revealed was that he had used the equation against the Machine to create something called the Earthstone; a combination of some of the rarest and purest stones on the planet, mixed and remixed to create technology more advanced and powerful than any invention in human history. This crystal technology could rival that of the most advanced races in the universe, and it was native to Earth. And Ascension has been mastering that technology with each attack it has made. Those attacks, meanwhile, are meant to send humanity through time, back to its beginning; free of the influence of the alien technology.

Not long after the incident at Mr. Colder's farm, Clark attempted to fly of his own accord, managing only to jump an average height and distance. Frustrated, he returned home, to find his mother being held at gunpoint by Mr. Colder, who knew about Clark and Lana's visit to his property.

At the Fortress of Solitude, Superman locates the energy signature of Ascension's sub. In the meantime, Wraith has a look around and notices that the fortress is full of technology from alien races Superman has defeated. He wonders why Clark doesn't turn them over to his country. Clark responds grimly that no country should have weapons like these. Moving on, Wraith wonders if Clark can use his technology to map the location of his home planet. Looking on it, he remarks that his planet might as well have vanished as Krypton did, for all his remaining connection to it.

He has been on Earth for some time, and his people are older than those of Krypton, though they shared a propensity for the spread of knowledge and peace. Superman doubts this, noting that Wraith seems to have allied himself fully with the US Military's agenda. Wraith responds that he has allied himself with the country. After all, Clark's real parents chose the United States for Clark to land in for a reason, surely. They might have meant for Clark to fight for it. Clark responds that he does fight for it - but outside of the constraints of the military. Wraith explains that walking the line Superman walks is not something that can last. Eventually, his secret identity will be discovered. He himself had refused to follow General Lane's orders to discover it, if only because he knew that the attachment to behaving as humans do would have to end.

Wraith has Superman imagine a scenario a week in the future, where he is in his human identity of Clark Kent, at work, visiting his friends. In just ten years, though, those friends will appear much older, while he will look the same as before. As time goes on, he would have to apply makeup if he wanted to appear to age as they do. In forty years, some of them might have died, and aged considerably. In eighty years, there might well be nothing left of the Daily Planet. Just him, wearing a phoney disguise that he no longer needs. Superman dismisses the thought exercise as irrelevent, but Wraith insists that the limbo in which Superman and Clark Kent reside cannot last - particularly because he intends to take this opportunity to take all of the alien weaponry in the fortress, and neutralize Superman.

Mr. Colder turned his gun on Clark, explaining that as crazy as everyone in Smallville thought he was, he knew what he'd seen, and that was Clark floating in mid air. Angirly, Martha knocked his gun barrel aside, but he clubbed her into unconsciousness with it, and unloaded a shot at Clark.

Lois attempts to make a run for it, but she is no match for the collective Ascension. Annoyed, their leader decides he will teach her a lesson, and burn out her eyes - right before launching the nukes.

Wraith explains that his actions are only to protect. Superman's life is on a collision course with reality, and it will only stop if he joins the Machine. At that moment, a call comes from Batman and Wonder Woman, who warn that Ascension has launched a full-scale nuclear attack. Superman asks how many were launched, and is horrified to learn that every nuclear missile on the planet has been fired at once.

As the buckshot hit Clark's chest, Mr. Colder warned that there could be no more hiding, continuing to fire shot after shot at the boy while his mother looked on.

Retrieved from "https://heykidscomics.fandom.com/wiki/Superman_Unchained_Vol_1_5?oldid=1604225"
Community content is available under CC-BY-SA unless otherwise noted.