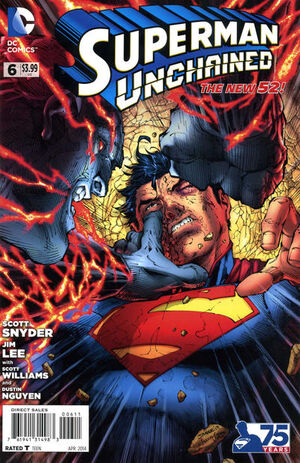 The launch of even one such missile would be an unmitigated catastrophe. Fifty of these weapons, if allowed to detonate, would provoke disastrous, deadly changes in the Earth's climate. Six seconds ago, every single high alert missile in the world initiated its launch program.

Superman has been kept up at night worrying about the proliferation of nuclear missiles on earth, hoping that none of them will ever be launched. He is, therefore, disturbed when he learns now that the terrorist group called Ascension has caused every single high-alert missile on the planet has begun its launch sequence. The Justice League has responded, but even with their best efforts, they will only be able to stop 60% of the weapons unless Superman can get to Ascension and get the launch codes from them. He springs into action, calling on Wraith to help, but Wraith comments that he will only be going after missiles headed for American targets. Angrily, Superman responds that Wraith will be responsible for whatever happens as a result of that decision.

On their sub in the Atlantic Ocean, Lois Lane does her best to get free of Ascension's grips so that she can stop their nuclear launch. Unfortunately, they outnumber her, but before they can kill her, Superman crashes through the hull and attacks their leader, demanding to know how to stop the launch. The man responds that it's too late. Wraith and Superman will die in a nuclear winter, and humanity will rise from the ashes to ascend. Lois interrupts to explain that Ascension is using some kind of crystal technology to access the technology. She explains, picking the crystal up off the floor, that they call it the Earthstone, and if he places it in their console, he may be able to operate it. Superman is suspicious, noting that the crystal technology is similar to Kryptonian, but is different. Angrily, the Ascension leader responds that it is their technology, and he can't have it. He arms a self-destruct sequence, and Superman has only moments to pull Lois out of the sub before it goes up in flames.

From their vantage point in the sky, Lois and Clark can see the path of the missiles, and they know they can't reach them all in time - especially without Wraith helping to stop any that might land outside of America. Desperately, Superman takes the crystal shard and attempts to use it, but he encounters resistance. Intensely focusing, he activates the crystal, and it begins emanating its electronic signal across the world, shorting out every missile in its path. Glad to have succeeded, Superman brings Lois down to solid ground, just as Wraith appears to demand possession of the crystal so that he can hand it over to Lois' father, General Lane, for study. Superman refuses, and Lois promises to write a story exposing both Wraith and her father's organization, prompting Wraith to remind that he had warned that things would come to this: a battle to the death.

As he slams Superman into the side of a glacier, Wraith explains that all of this could have been avoided if Superman had only agreed to join him. Superman responds with a secret weapon. He had Batman synthesize a mineral based on Wraith's energy signature that would behave in a similar way toward Wraith as Kryptonite does toward Superman. Taking a beating, Wraith swears he'll kill Superman, but General Lane calls him off, requiring Wraith to disengage immediately. Before leaving, Wraith promises that he will make Superman suffer, one day.

Afterwards, Lois is surprised by her tour of the Fortress of Solitude, having only seen it from the outside before. It strikes her as more clinical and office-like than she expected; not especially homey. She wonders, though, why he brought her there. He responds that it was to keep her safe from Ascension. He can't safely assume that all of Ascension was aboard the exploded sub. He has further concerns about the crystal shard, too. He sensed something else manipulating its energy; a presence who wanted something. Suddenly, the crystal leaps out of his hands, and begins to re-write itself. Before he can do anything about it, Superman and Lois are surprised to hear a warning from General Lane. The Machine has come to blow the Fortress of Solitude to dust.

Later, Batman returns to the Batcave, and finds Wraith waiting to kill him.

Retrieved from "https://heykidscomics.fandom.com/wiki/Superman_Unchained_Vol_1_6?oldid=1606958"
Community content is available under CC-BY-SA unless otherwise noted.