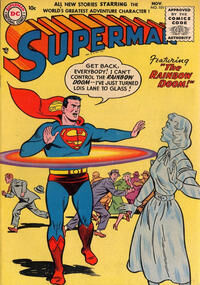 Lex Luthor steals seemingly worthless objects to form a rebus which he challenges Superman to decode.

Appearing in "The Meek Man's Club"Edit

Synopsis for "The Meek Man's Club"Edit

The Metropolis Meek Man’s Club tries to bolster the confidence of Clark Kent in order to show themselves that their meekness can be overcome.

Appearing in "The Rainbow Doom"Edit

Synopsis for "The Rainbow Doom"Edit

Superman appears to be stricken with a condition that turns anything or anyone in his proximity into glass.

Retrieved from "https://heykidscomics.fandom.com/wiki/Superman_Vol_1_101?oldid=1380666"
Community content is available under CC-BY-SA unless otherwise noted.