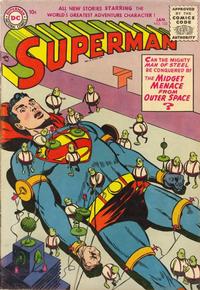 Appearing in "Superman For Sale"Edit

Synopsis for "Superman For Sale"Edit

To trap the secret leaders of a crime syndicate, Superman and U.S. Treasury agent Barclay set up a phony “Superman Stock Company” and lure the crooks into buying stock in it.

Appearing in "The Midget Menace"Edit

Synopsis for "The Midget Menace"Edit

Superman is captured by a race of pygmies from space who wish to learn the secret of his strength.

Appearing in "The Million Dollar Mistake"Edit

Synopsis for "The Million Dollar Mistake"Edit

A con man plans to play upon Superman’s sympathies for the Daily Planet to net him a cool million.

Retrieved from "https://heykidscomics.fandom.com/wiki/Superman_Vol_1_102?oldid=1380667"
Community content is available under CC-BY-SA unless otherwise noted.