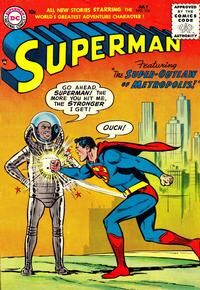 Dr. Reese Kearns, once discredited for panicking Metropolis with a meteor “hoax”, gets the Daily Planet to run a contest in search of Superman’s earliest super-feat. When pressed for the answer, Superman uses his super-memory to recall an incident in which, as baby Kal-El, he briefly emerged from Jor-El’s rocket, fought a crystalline insect on a meteor, and then pushed off from the meteor to return to his rocket. The push-off sent the meteor off course and caused it to miss Metropolis, thus invalidating Kearns’s claim. With that revelation, which Kearns had suspected, his reputation is repaired.

Appearing in "The Thefts of Clark Kent"Edit

Synopsis for "The Thefts of Clark Kent"Edit

Lex Luthor creates an alloy that picks up energy Superman uses in his super-feats and transmits it to a suit of electronic armor he has invented. The suit gives Luthor all of Superman’s powers, but Superman defeats him by exposing himself to Kryptonite, which also transmits weakness to Luthor’s suit.