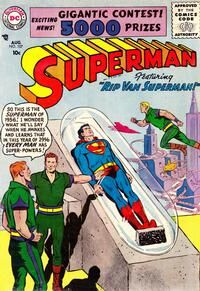 Appearing in "The Make-Believe Superman"Edit

Synopsis for "The Make-Believe Superman"Edit

Superman takes the place of an actor who masquerades as him to lure a crime boss into the open.

Appearing in "The Impossible Haircut"Edit

Synopsis for "The Impossible Haircut"Edit

Lois Lane and Clark Kent interview a master barber who claims to have cut a lock of Superman’s hair.

A cyclotron accident in which Kryptonite is involved puts Superman in a coma. He is placed in a tomb, and sleeps until the 30th Century. Upon awakening, he learns that “vitamins and hormones” have given all Earth people powers similar to his own. But the people of Earth are overly-dependent on robots to do their work, and fall prey to a villain named Drago. Superman rallies the people of the 30th Century to defeat Drago. As repayment, two men of that time send Superman back to his normal era with an experimental time machine. He awakens in his glass tomb only minutes after he had been placed in it.