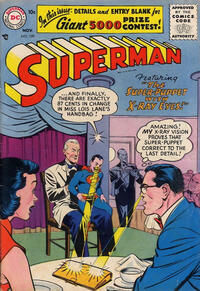 Appearing in "The Man Who Stole Superman's Powers"Edit

Synopsis for "The Man Who Stole Superman's Powers"Edit

Superman is hoodwinked by a hustler named Abner Hokum who hopes to profit on his super-deeds, but the Man of Steel manages to turn the tables.

Appearing in "The Puppet With X-Ray Eyes"Edit

Synopsis for "The Puppet With X-Ray Eyes"Edit

Two crooks are convinced a Superman ventriloquist’s dummy has X-ray vision, and plan to snatch it.

Appearing in "The Duplicate Disasters"Edit

Synopsis for "The Duplicate Disasters"Edit

Great disasters of the past are reoccurring in the modern world, and Superman must learn the source of the problem.

Retrieved from "https://heykidscomics.fandom.com/wiki/Superman_Vol_1_109?oldid=1380673"
Community content is available under CC-BY-SA unless otherwise noted.