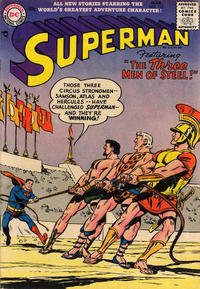 Superman secretly (and sometimes overtly) takes care of his neighbors’ pressing problems at Clark Kent’s apartment building, but learns that one neighbor, Alexander Ross, is convinced that Kent is a crook posing as a reporter.

Lex Luthor creates a ray which, when bounced off Superman’s costume, can transmute matter into different forms.

Appearing in "The Three Men of Steel"Edit

Synopsis for "The Three Men of Steel"Edit

A scientist finds a method to give normal people super-strength, and Lois Lane takes a treatment herself.

Retrieved from "https://heykidscomics.fandom.com/wiki/Superman_Vol_1_112?oldid=1380676"
Community content is available under CC-BY-SA unless otherwise noted.