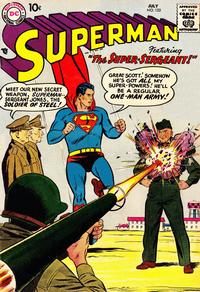 I'm resigning as Vice-President! How could I ever become President if Superman is invulnerable?

Appearing in "The Secret of the Space Souvenirs"Edit

Synopsis for "The Secret of the Space Souvenirs"Edit

Lois Lane notices that Superman has been acting strangely as late. He appears to suffer from a strange trance wherein he begins collecting items for a Superman time capsule. He admits, that he cannot control this compulsion and fears that he may be under some villain's mind-control.

He first flies to the planet Saturn where he gathers an indigenous musical mineral. He then flies to Uranus where he finds a rare breed of six-legged horses. Next is Pluto, where he gathers together giant frozen snowflakes. He then returns to Earth where he recovers wreckage from an alien ship found in the ruins of ancient Atlantis. Afterwards, he flies back into space where he finds a knotted tree from Rhea – one of Saturn's moons. He then collects a statue from Mars, a flower from the moon, Ariel, and finally a stone statue of himself erected on Neptune.

Lois Lane begins to figure out the pattern to Superman's strange trips. The first letter of each place he visists spells out the name, Superman.

That evening, Superman has a dream where a humanoid from the 50th century telepathically explains to him that he has been controlling his recent actions. The future man intends on unearthing the Superman time capsule and wants to provide his fellow admirers with souvenirs of the Man of Steel's various adventures.

Appearing in "Superman in the White House"Edit

Synopsis for "Superman in the White House"Edit

Perry White assigns Clark Kent, Lois Lane and Jimmy Olsen with an assignment to write a Patriot's Day piece about a famous president. Jimmy ponders what the world would be like if Superman were president. While attempting to straighten a photograph, the picture falls from the wall, smacking Jimmy in the head. Jimmy falls unconscious and has a dream that Superman is actually the President of the United States.

In this dream, Clark Kent is Superman's vice president, and Jimmy is his press secretary. Superman becomes the country's most revered president ever, and even has his image placed upon the one-hundred dollar bill and the postage stamp.

Jimmy Olsen eventually awakens and tells Clark of his dream. Clark explains to Jimmy that Superman could never become president as he is not a naturalized United States citizen.

Superman volunteers to test out a new experimental transmitter helmet for a scientific research firm. While testing the equipment, a lightning storm erupts and a bolt strikes Superman. The lightning interacts with the helmet-radio and replicates Superman's powers, transmitting them to a random individual. The displaced power discharge strikes an Army private named Jones, granting him powers similar to that of Superman.

Perry White wants Clark Kent to investigate the Army's latest super-soldier, and arranges to have him enlist in the U.S. Army to get the exclusive. While observing Private Jones' various bungling super-feats, Clark learns that two foreign spies have infiltrated the PX. He decides to lay low in order to see how things develop.

Before long, Private Jones' powers earn him the admiration of his superiors and he is quickly promoted to the rank of sergeant. The spies report back to their masters that Superman now has the ability to transfer his powers to others, thus creating an army of Supermen. This is exactly the effect that Superman was hoping for, and he comes to learn that the foreign powers will now halt all scheduled attacks against the United States.

Satisfied that Sgt. Jones has fulfilled his purpose, Superman exposes him to green Kryptonite, thus robbing him of his borrowed powers.

Retrieved from "https://heykidscomics.fandom.com/wiki/Superman_Vol_1_122?oldid=1506443"
Community content is available under CC-BY-SA unless otherwise noted.