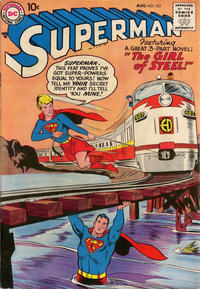 I have all your super-powers and will aid you in all your doings, Superman! As Jimmy wished, I'll be your constant companion!

Appearing in "The Three Magic Wishes"Edit

Synopsis for "The Three Magic Wishes"Edit

The Girl of Steel
Jimmy Olsen visits an old archaeologist who discovers a mystical totem inside of a Native American cave. He gives the totem to Jimmy as a souvenir and tells him of the legend on how to make it work.

Jimmy takes the souvenir home and rubs a jewel in the totem's hilt at midnight. As he had hoped, the spirit residing inside the totem grants Jimmy three wishes. Jimmy's first wish is to provide his pal, Superman, with a Super-Girl companion. A blond-haired female Kryptonian magically appears before him, and flies off to meet Superman.

Super-Girl attempts to help the Man of Steel in his daily patrols, but only manages to hinder his efforts. Every time Superman tries to stave off some emergency, Super-Girl gets in his way and turns every situation into a major blunder.

One day however, a group of thugs spots Superman attempting to repair a broken suspension bridge. Armed with a supply of deadly Kryptonite, they drop the mineral on top of him. Super-Girl spots the ailing Man of Steel and rushes to his aid. She heroically pulls the Kryptonite away, even though she realizes that the meteor's radiation is lethal to her as well. Jimmy Olsen uses the magic totem to wish her back out of existence before she can succumb to Kryptonite poisoning.


The Lost Super-Powers
A few days later, two thugs discover that Jimmy is in possession of the magic totem. They break into his apartment and steal it, then proceeds to use the staff's wish powers to render Superman powerless.

Superman quickly discovers that his powers are not working and walks over to Jimmy's place only to discover that the staff is gone. He quickly deduces that the totem is responsible for his missing abilities, and Jimmy and he embark upon a plan to ferret out the thieves.

Superman volunteers for several public exhibitions, which require him to use his powers. The thieves dress up as reporters to watch Superman, and are shocked when it appears as if his powers had not disappeared at all. Working behind the scenes, Jimmy Olsen compensates for Superman's power loss with an array of strange tricks and illusions. Superman divines the identity of the true culprits, and follows them back to their apartment. However, the thieves are also in possession of a block of Kryptonite, which they then hurl directly at Superman. The Kryptonite fails to have any effect, as Superman is powerless already. The thieves mistakenly believe that Superman is just as powerful as he ever was, and give themselves up.

Superman recovers the magic totem and brings it back to Jimmy Olsen. Jimmy cancels the effects of the second wish, restoring Superman's Kryptonian abilities.


Superman's Return to Krypton
Jimmy decides that it is time to make his final wish with the magic totem. Superman tells him that he should make a wish for himself, but Jimmy feels guilty for allowing the totem to be stolen in the first place. He wants to surprise Superman with his wish, so he types it out, rather than speaking it aloud. His wish is to send Superman back to Krypton to meet his dead parents, Jor-El and Lara. However, Jimmy mis-types the word "meet" and types "mate" instead.

Superman is whisked suddenly through the time stream where he winds up on Krypton many years before his own birth. As he is not meant to exist in this time, Superman can only appear as a phantom spirit. He finds Jor-El and Lara working alongside another Kryptonian named Kil-Lor. He is shocked to discover though, that his future parents are working alongside Kil-Lor to conquer the planet, Krypton. He cannot believe that his parents are actually traitors.

Suddenly, members of the Krypton Bureau of Investigation burst into Kil-Lor's lab and apprehend all three conspirators. Jor-El reveals that he is actually an undercover KBI agent, but fails to provide evidence proving his and Lara's innocence. The agents arrest the three of them, and place them inside a special behavioral modification satellite.

The phantom Superman follows the trajectory of the satellite and finds that he can regain his physical form once he is off the planet. The satellite sets down on an asteroid in a yellow star system. Now a corporeal being, Superman has the chance to physically meet his parents. Kil-Lor however has other plans. He discovers that he has super-strength, speed and the power of flight. He announces his intention to conquer Krypton and Superman and he begin fighting. Superman tricks Kil-Lor into using his super-strength to smash pieces of asteroid rock together, creating a chain reaction that turns the immediate area into Kryptonite. Kil-Lor grows weak from the effect and falls over unconscious.

Superman says his final goodbye to Jor-El and Lara, just as the two propose to one another. He returns to Earth through the space-time barrier and tells Jimmy of his adventure.

Retrieved from "https://heykidscomics.fandom.com/wiki/Superman_Vol_1_123?oldid=1504085"
Community content is available under CC-BY-SA unless otherwise noted.