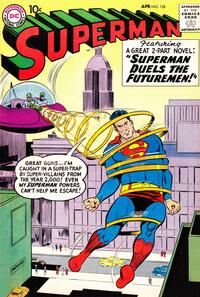 Appearing in "Superman versus the Futuremen"Edit

Synopsis for "Superman versus the Futuremen"Edit

One day in Washington, D.C. at FBI headquarters, two FBI agents are startled by the appearance of a strange ship in their office. Emerging from the craft are two men claiming to be from the year 2000, and that they are part of the Earth Bureau of Investigation (or EBI for short.) They claim that Superman is really a criminal named Shark, who came from their time, stole a potion that gave super powers and escaped into the past, and that they have come seeking the criminals arrest. Their initial encounter with Superman, leads to the Man of Steel fleeing them and escaping to his Fortress of Solitude. Believing he may be captured by the EBI and taken back to the future, Superman records a tell-all tape about his true origins and trusts it to Perry White, who promises to only listen to it should Superman be arrested and taken to the distant future.

The EBI agents get a hold of a special form of Red Kryptonite that will destabilize Superman's powers, making him appear as though he's a menace before his powers are nullified for two hours. This leads to Superman's powers going berserk and the eventually becoming powerless, and easily captured. Now powerless, Superman is taken to the future, where he is supposedly to be put on trail. However, it turns out that the Futuremen are really criminals, and after immobilizing Superman and hiding him in plain site at the Superman museum, they smuggle him off Earth and take him to an asteroid belt. Superman soon learns that Earth is experiencing a water shortage and plans on using one of Saturn's moons -- which is a large chunk of ice -- to create more water for the planet. The crooks demand that Superman take control of the moon so that they can ransom it off for a large sum of money.

When Superman refuses, they seal him in a cage made out of Red Kryptonite and demand that he do so, less they use an atomic weapon on the modern day Earth to put it in the same drought condition as the Earth of the year 2000. Superman uses his x-ray vision to blast a passing asteroid and smashing open the cage, freeing him. He then goes after the Futuremen and easily takes them into custody, turning them over to the Earth authorities, and then bringing the Saturian Moon to Earth and replenishing the planets water supply. The authorities on Earth give Superman documents citing that he was framed and allow him to return to his own time. Superman returns to the present and manages to get to the Daily Planet, destroying the tape confessing his secret identity before Perry White and Lois Lane can learn Superman's secret identity.

Appearing in "The Sleeping Beauty from Krypton!"Edit

Synopsis for "The Sleeping Beauty from Krypton!"Edit

Lois Lane is a contestant on the show "Bid the Price" and correctly appraises the value of a giant gong Superman once used on an alien robot. As the winning contestant, Lois is gifted with props from the film "The Krypton Story" including a replica of the ship that brought Superman to Earth, a Kryptonian woman's outfit, a Kryptonian camera and slides from and footage from the film.

Lois gets the idea to try and use these items to trick Superman into revealing his secret identity. Putting on the costume and a blond wig, Lois tracks down Superman and convinces him that she's really Rama, his apparent babysitter from Krypton. Explaining that she was put in suspended animation and launched from Krypton before it exploded by his father, she explains that she pasted through a cloud of Kryptonite dust that temporarily nullified her powers. Using the props that she won on the game show, Lois manages to fool Superman, who reveals his secret identity of Clark Kent. However, returning home, Superman realizes that he's been tricked because there would have been no way "Rama" would have learned that her powers were temporarily lost from Kryptonite if she was in suspended animation the whole time.

Learning that it was really Lois Lane hoaxing him, Superman then comes up with a way to "disprove" that he's really Clark Kent. The next day, Superman appears before Lois and tells her that he's in love with Rama and intends to marry her. Lois reveals to him that she is really Rama and that she knows her secret identity. When Clark Kent suddenly appears before both Lois and Superman, Lois is still not convinced. Believing that Clark is really one of Superman's robots, she has him stand in front of an x-ray, which proves that he's really a human. Next, convinced that Superman is truly the robot, she has the Man of Steel exposed to electromagnets, which yield no results. Convinced that Clark Kent and Superman are two different people once more, the flustered Lois realizes that it was all a hoax and that Superman trying to teach her a lesson once more. When Lois leaves, "Clark Kent" unmasks himself, and is revealed to be Superman's friend Bruce Wayne (AKA, Batman) who was called in to cover for him.

Retrieved from "https://heykidscomics.fandom.com/wiki/Superman_Vol_1_128?oldid=1380692"
Community content is available under CC-BY-SA unless otherwise noted.