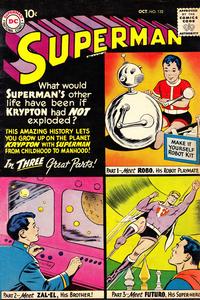 How strange fate works! If Krypton had never exploded, I would have ended up as there as - Superman!

Appearing in "Superman's Other Life"Edit

Synopsis for "Superman's Other Life"Edit

Visiting Superman and his Fortress of Solitude, Batman and Robin have come presenting a gift to Superman for a previous rescue. Batman and Robin gift the Man of Steel with an impressive idea: Feed all known information info about Krypton into Superman's Univac Computer and see if it can predict what would have happened if Krypton was not destroyed.

The computer presents a possible history where Jor-El was wrong about Krypton's imminent destruction and stops young Kal-El from being launched into space. The young Kal-El is raised by his parents and enjoys time playing with his dog Krypto and his new robot companion: Robo, whom he built himself. Attending school, Kal-El takes an interest in the planet Earth, and while viewing the Kent family, saves them from a car accident, they would go on an adopt a girl from the Smallville Orphanage instead of their fated destiny to adopt Kal-El as a child. Later Jor-El and Lara give birth to a second son Zal-El.

Kal-El would finish school and begin participating in the Space Patrol in the hopes of riding in rank to be able to partake in missions into space. He is mentored by superior officer Xan-Du. One day when Xan-Du is testing out a new Static-Ray device (Which has different effects on different creatures) Xan-Du and Krypto are accidentally bombarded with the devices rays, causing both to be given super-powers similar to that of Superman when on Earth. Having to go to a costume party, Xan-Du takes on a costume similar to that of Superman's and calls himself Futuro.

At the costume party, (where Kal-El has dressed up as an Earth man and ironically dressed up as his real-life alter ego), the hovering building where the festivities are taking place begins to plummet, prompting Xan-Du to rescue everyone, and continue his Futuro guise and act as a super-hero on Krypton. When Kal-El discovers Krypto's super-powers, he has the dog pull him to where Futuro's secret hide out is and learns his true identity. Kal-El then becomes Futuro's sidekick trusting the hero to his secret identity. Futuro becomes a hero on Krypton, coming to the rescue and having Kal-El. During a mission in space, Kal-El's parents and brother are killed when their rocket ship crashes on a magnetic asteroid causing their ship to explode. Futuro builds a monument to the family on an chunk of the exploded asteroid in their memory.

Later a ship from Earth is caught in space, and Futuro saves the occupants and brings them back to Krypton, aboard the rocket it reporter Lois Lane, who is shown around Krypton by Kal-El, Lois grows fond of Futuro. After a misadventure with a Kryptonian drilling device, leading to Futuro saving Lois and Kal-El, Futuro admits that he has fallen in love with Lois and asks her to marry him. Deciding to return with Lois to Earth, Futuro uses the Static Device on Kal-El, giving him super-powers as well and leaving him to defend Krypton, dubbing him Superman.

With this vision of a possible alternate course Superman's life could have been taken, the three heroes muse over how Kal-El was always fated to become Superman.

Retrieved from "https://heykidscomics.fandom.com/wiki/Superman_Vol_1_132?oldid=1380696"
Community content is available under CC-BY-SA unless otherwise noted.