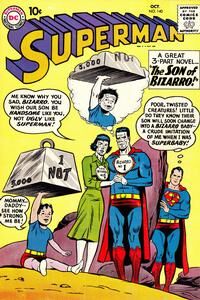 Appearing in "The Son of Bizarro"Edit

Synopsis for "The Son of Bizarro"Edit

On the Bizarro World, Bizarro returns from his "Fourtriss Uv Bizarro" to Bizarro Lois, he is horrified to find that she has given birth to a baby that isn't ugly. Try as they might, the couple cannot make the Bizarro Baby adhere to the edicts of their society. Learning of the perfect Bizarro Baby, the people of the Bizarro world demand that Bizarro get rid of his child. Bizarro complies to appease them by putting the child in a traveling satellite in space. After the crowd is pleased, Bizarro goes back into space to secretly retrieve the satellite but finds that it is gone.

The satellite crashes on the planet Earth and the Bizarro Baby is found by a couple who take the baby to the Midvale Orphanage. There, the Baby Bizarro is named Buster and taken into the orphanages care. When Linda Lee watches over the baby, she is shocked that the baby has super-powers just like hers and is running amok around the place. Changing into Supergirl, she tries to subdue the baby. When it flies into Metropolis, it attracts the attention of Superman and the two calm the baby and convince it to go back with Supergirl to the orphanage where she resumes her identity of Linda Lee to keep an eye on the Bizarro Baby. Superman then has a pair of robots disguised as a couple adopt the Bizarro child and Supergirl takes it to the Fortress of Solitude, where they occupy the boy with Krypto and other marvels.

Searching for his missing child, Bizarro learns and is upset with the fact that his baby is on Earth and has been accepted by his foe Superman. Trying to keep up with her school work, Supergirl does a science experiment in the Fortress while the Bizarro Baby sleeps. However, she uses too much power in her x-ray vision to heat the chemicals causing them to explode. When the dust clears, Supergirl is horrified to find that the Bizarro Baby has taken on the appearance of a true Bizarro. When the baby awakens he causes a ruckus in the Fortress, accidentally activating the duplicator machine that originally created Bizarro, and training it's beam on Supergirl, creating a Bizarro Supergirl. The Bizarro Supergirl becomes very possessive of the Bizarro Baby and refuses to let Superman or Supergirl get anywhere near her. When Bizarro goes to Earth to collect his child, he finds that the Bizarro Supergirl will not let the girl go.

Going back to his home world, Bizarro gathers an army to attack the Earth to get the baby back, unable to get the baby free from the Bizarro Supergirl, Superman dawns a suit of lead armor and goes to an asteroid where a cache of green Kryptonite boulders have been stored. Using the duplicator he creates a pile of Bizarro Kryptonite and uses it to turn back Bizarro's invasion force. Taking a chunk back to Earth, Superman uses it to weaken Bizarro Supergirl enough for them to take the baby back into their custody. Fleeing Earth, they are chased after by Bizarro Supergirl, however she decides to wait on an asteroid to see where they take the baby in order to take it later. After returning Bizarro Baby to his family, Superman and Supergirl return to Earth, along the way they see that the asteroid that the Bizarro Supergirl hid on was the one with the pile of Bizarro Kryptonite, the rays from this Kryptonite killing her.

Retrieved from "https://heykidscomics.fandom.com/wiki/Superman_Vol_1_140?oldid=1380704"
Community content is available under CC-BY-SA unless otherwise noted.