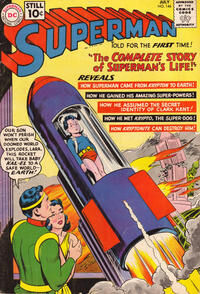 Appearing in "The Story of Superman's Life!"Edit

Synopsis for "The Story of Superman's Life!"Edit

Recounting the origins of Superman's past and early life, the tale is re-represented for to the reader:

The tale begins by explaining to the reader about the planet Krypton, how it was a highly advanced world that orbited around a red sun. Lead scientist Jor-El would soon learn of a catastrophic nuclear reaction happening in Krypton's core that would threaten to destroy the entire planet, however his warnings of doom would be ignored. Desperate, Jor-El would focus on building a rocket ship to save his family. His first test rocket, using Krypto the family dog, would end with the rocket being struck by a meteor and the ship being lost in space.

With Krypton's destruction immanent, Jor-El would send his own son, Kal-El out in his next rocket in the hopes that their boy would be come the last survivor of Krypton. The rocket would blast off into space just as Krypton explodes and land on the planet Earth. There the body of young Kal-El would be ejected from the rocket which would self destruct shortly thereafter. The boy would be found by Jonathan and Martha Kent, who would decide to adopt the boy. So as not to attract undue attention, they would anonymously leave the by at the Smallville orphanage and adopt him later.

To their surprise, they learn that the boy has many super-powers, including super-strength, x-ray vision, invulnerability and more. Realizing that with the boy moving at super-speed he would burn up his clothing, they realize that the blankets that were in his ship are near indestructible and fashion an outfit for the young boy, whom they name Clark Kent. When the learn that the boy can also fly, Jonathan helps the boy learn how to control his flight and helps him perfect the use of his powers. When Clark grows up to be a teenager, the Kents fashion him a costume and he goes out and fights crime as Superboy. However to protect his secret identity, they have Clark wear a pair of glasses. However when his x-ray vision melts the lenses, Clark fashions indestructible ones out of the glass dome of his ruined ship.

He would start a romance with Lana Lang, who would become suspicious of Clark's secret identity. So, in order to avoid his true nature being revealed Clark would fashion a Superboy robot to go out into public to eliminate and possible suspicion. He would also build a secret hideaway in his parents basement. Superboy would later be reunited with his family pet, Krypto, when the ship carrying the Kryptonian pooch crash lands on Earth. Eventually, as Superboy grows into a man, Martha and Jonathan pass away. Jonathan's last words to Clark were to keep doing good deeds. Afterward, Clark would leave Smallville and attend Metropolis college, where he would eventually graduate and get a job as a reporter from the Metropolis Daily Planet where he would make new friends.

As Superman, Clark would become known worldwide and be celebrated as the premiere super-hero of planet Earth.

After Superman saves Atlantis from an atomic testing, Lori Lemaris begs him to try and change history so that Atlantis will not have sunk. Despite his knowledge from a trip back to Abraham Lincoln’s time as Superboy that history cannot be changed, Superman agrees to try. He goes back in time, prevents Atlantis from sinking, rescues Christians from the Colosseum, saves Nathan Hale from being hung by the British, rescues General Custer and his men at the Little Big Horn, stops John Wilkes Booth from shooting Abraham Lincoln, and builds a fleet of space arks which save the population of Krypton before their homeworld explodes. But, when he sees baby Kal-El in the arms of Lara at a time in which he still exists materially, he realizes that he cannot be in his own universe, where such a paradox would be impossible. Instead, he learns that he has gone into a parallel universe, where history can be changed. Since his existence there creates cosmic disturbances that threaten that universe, Superman returns to the Earth-One plane, and tells Lori that he cannot change their history--but in that other universe, Atlantis never sank and the people of Krypton live.

Retrieved from "https://heykidscomics.fandom.com/wiki/Superman_Vol_1_146?oldid=1380710"
Community content is available under CC-BY-SA unless otherwise noted.