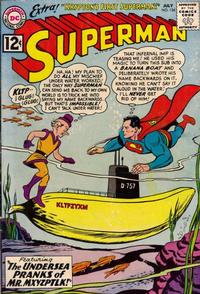 Appearing in "The Underwater Pranks of Mr. Mxyzptlk!"Edit

Synopsis for "The Underwater Pranks of Mr. Mxyzptlk!"Edit

In the 5th Dimension it's getting time for the Academy of Practical Joking to announce their annual Brxll Awards, to award the best practical joker in the dimension. With stiff competition, Mr. Mxyzptlk wishes to succeed as opposed to winning yet another Booby Prize. He thinks back to all the times that Superman has thwarted him in the past by tricking him into saying his name backwards and comes up with a solution: If he can't be made to say the word because there is no air, then he could go on playing pranks on Superman endlessly and surely win the Brxll award.

On Earth, Superman is called to aid an odd occurrence: Somehow, sailing ships have been made to fly and airplanes to sail on the water. Suspecting his old foe Mr. Mxyzptlk, Superman locates him hanging out in the outskirts of Lori Lemaris' Atlantis. He tries to trick Mxyzpltk to say his name backwards, but this fails as they are underwater and Mxyzpltk cannot speak while immersed in water. Mxyzpltk then mocks Superman by turning a submarine into a giant banana with Ktlpzyxm written on it and purposely tries to read it to show that he cannot do so under water.

Mxyzptlk's next prank has all the grown-ups in Metropolis begin behaving like children. Superman attempts to thwart Mxyzptlk by having everyone sing a song that has the word Ktlpzyxm in the lyrics. This once more fails as Mxyzpltk is under a fountain and it's water prevents him from talking as well.

For his next trick, Mxyzptlk makes all the animals on Earth able to speak English, which most people dismiss as hoaxes. Superman finds Mxyzptlk in a pond and once more tries to get him to say his name backwards. When this fails, Superman gets fed up and retreats to the Moon where he vows to stay until Mr. Mxyzptlk goes back to his home dimension. Not finished mocking the Man of Steel, Mxyzptlk travels to the Moon where he mocks Superman further by trying to say his name backwards in the airless void. Superman finally gains the upper hand when he uses his x-ray vision to free some oxygen trapped in the Moons rock that creates enough of an atmosphere that when Mxyzptlk says his name backwards again it is actually heard and he is shunted back to the 5th Dimension.

Adding insult to injury, when Mxyzptlk arrives home, he is not awarded a Bxrll award, but the hated Booby Prize.

When Perry White, Lois Lane and Jimmy Olsen award Superman with a plaque in thanks for his assistance in helping the paper get scoops, Superman shocks them all when he suddenly destroys the Daily Planet's printing press. Superman snaps out of his destructive mood as suddenly as it came on and he quickly repairs the damage before shamefully departing.

Spotting a bank robbery, Superman initially goes to capture the criminals, but suddenly helps them escape. Back to normal, Superman checks to see if it's his old foe Lex Luthor manipulating him so, but finds that Luthor is still in his prison cell. The Man of Steel then suddenly feels the urge to wreck the Temple of Ilena, a Mermaid goddess that is worshiped by the Atlanteans led by Lori Lemaris. Lori summons Supergirl who stops Superman's rampage and repairs the damage. When Superman returns to normal, he agrees to wait on a deserted island while Supergirl investigates what has happened.

Going to the Fortress of Solitude, Supergirl learns that there is no trace of Red Kryptonite in the area that could have effected Superman. Suddenly she is shrunk down in size and transported into the Bottle City of Kandor. There she is met by Lon-Es. Lon-Es explains to Supergirl that he has figured out what is causing Superman to go on his rampages. He explains that years ago on planet Krypton, there was a lab assistant that worked with Lon-Es and Jor-El named Ral-En. One day after an experiment exploded on the them, Ral-En seemingly appeared to have gained super-powers similar to that of the modern day Superman. Ral-En would soon be hailed as a hero after saving Krypton from invaders however he would soon become a tyrannical dictator who would take over Krypton and force all to give up their valuables to him.

Everyone followed blindly except for Jor-El who would reveal that Ral-En was not super-powered but used a method of mass hypnosis to make everyone think he was. Easily dethroned, Ral-En was then banished to the Phantom Zone. Ral-En's father Mag-En would vow revenge against Jor-El for his sons banishment to the Phantom Zone. Sometime later Lon-Es would spot Mag-En putting a post-hypnotic suggestion into the mind of young Kal-El that when he would see a particular blue comet he would go on a rampage.

With the story over, Lon-Es would explain that he only now just remembered the story now that Superman has been behaving strangely. Supergirl is then returned to the outside of the city and she prevents Superman from destroying the Earth, and then seeks out an alien comet-eater and brings it to consume the comet that has caused him to act out in such a violent way.

Retrieved from "https://heykidscomics.fandom.com/wiki/Superman_Vol_1_154?oldid=1380722"
Community content is available under CC-BY-SA unless otherwise noted.