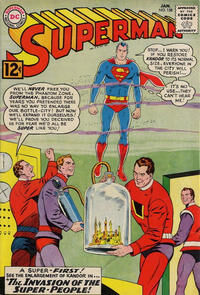 Appearing in "Superman in Kandor"Edit

Synopsis for "Superman in Kandor"Edit

A Kandorian scientist, Than Ol, convinces the people of the bottle city of Kandor that Superman knows how to enlarge Kandor but has refused, and the Man of Steel is declared an enemy of Kandor. Superman and Jimmy Olsen shrink themselves, enter Kandor, and first assume the secret identities of Nightwing and Flamebird to help them in their quest to prove Superman’s innocence, and to show the Kandorians that Than Ol’s enlarging process will not only make them normal-sized, but will also disintegrate them.

Retrieved from "https://heykidscomics.fandom.com/wiki/Superman_Vol_1_158?oldid=1380726"
Community content is available under CC-BY-SA unless otherwise noted.