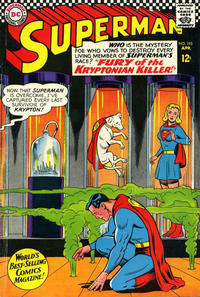 Appearing in "The Fury of the Kryptonian-Killer!"Edit

Synopsis for "The Fury of the Kryptonian-Killer!"Edit

Amalak brainwashes Rinol-Jag, last survivor of a planet which was destroyed by a planet-sized chunk of Kryptonite, into hating all things Kryptonian. Rinol-Jag goes on a hate crusade against the survivors of Krypton, destroying monuments to Superman, Supergirl, Jor-El and Lara, breaking into the Fortress of Solitude to capture the bottle-city of Kandor, and then using Kryptonite to capture Superman, Supergirl, and Krypto. But when Amalak tries to activate a device that will explode the Earth, Rinol-Jag questions his actions, and is shot by Amalak's ray-gun. Falling, Rinol frees Superman, who is wounded by Amalak but nevertheless manages to knock him out and short-circuit his bomb. Later, Amalak is imprisoned, and Rinol-Jag makes friends with Superman and Supergirl.

Retrieved from "https://heykidscomics.fandom.com/wiki/Superman_Vol_1_195?oldid=1380763"
Community content is available under CC-BY-SA unless otherwise noted.