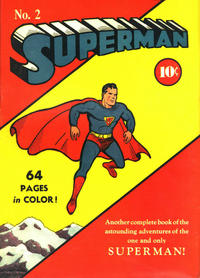 Appearing in "The Redemption of Larry Trent"Edit

Synopsis for "The Redemption of Larry Trent"Edit

Superman stops a man from plummeting off a bridge, only to discover that it was none other than former heavyweight boxing champ, Larry Trent. Trent curses Superman for saving him, claiming he's lost all confidence in himself. Back when Larry Trent was the heavyweight champ, his manager made a deal with a crooked gambler and spiked his drink, so that when he was out in the ring, he couldn't swing straight and lost the bout... and his title. Since then, He hasn't been able to get his spirit back, failing at whatever job he took.

Superman decides to help Larry get back to the top of his game. First, he disguises himself with make-up to look exactly like Trent, then he wins a few bouts in the gym's ring until the owner refers him to boxing manager Jock Kane. Still in disguise, Superman meets with Kane and shows him what he can do by laying out current champ "Slugger" Barnes right in his office. At first Kane was furious at the display, but Slugger convinces him to give the guy a chance in the ring. He later whispers to Kane that he just wants a chance to get Trent back for that punch earlier...

Superman enters the ring, while the real Larry Trent watches from the audience. Slugger tries a few of his trademark punches, but they have no effect on the Man of Steel's solid form. Barnes eventually wear himself out and falls to the mat, granting "Larry Trent" the victory. In the locker room, Tom Croy, Trent's sleazy old manager, approaches the disguised Superman and offers him a chance to be the champ again. After agreeing, Superman leaves the building, but still listens in with his super-hearing. Croy was planning the same old trick he used last time - getting Trent to the final championship and then drugging him so he loses the title match. Not this time, Superman thought...

At the Daily Star, Clark hands in an article to be printed after the big fight. His editor thinks he's gone mad, as it states Larry Trent as the winner. But Clark is willing to stake his career on his prediction becoming fact. That night in a rented apartment, Superman tells Larry that he was no longer going to be his double. Larry was really to fight in the ring to get his title back tonight!

As the bell rings to start the first round, Trent fights with everything he's got. His manager, Croy, and the gambler both watched from the sidelines, holding a canteen full of drugs to slow Trent down. But Larry Trent would not be fooled again. He refused the drink every time it was offered, in between rounds. But by round 6, he was so tired that he could barely keep Croy from trying to force the drink down his throat. Lucky for him, Superman was there, grabbing Croy by the lapels and forcing him to drink his own concoction! The gambler pulled out a small handgun, which Superman blocked with his palm, causing the gun to explode out the back. Trent goes on to win the heavyweight championship without further complications. His work done, Superman leaves him to his restored life. Back at the Star's office, the editor is impressed that Clark's article depicted the events of last night with such accuracy. Clark's reply was that it was just good ol' reporter's foresight.

Clark Kent is sent to interview professor Runyan about a new type of gas he's discovered, one so deadly it can seep right through a gas mask. Runyan gives Clark a demonstration of the effects by exposing a monkey wearing a gas mask to the deadly toxin. The gas immediately kills the test subject, impressing Clark. During the interview, some thugs suddenly burst into the lab. Clark is pushed out of the room, but his super-hearing picks up what was being said. The roughnecks' leader, Bartow, demands Runyan to hand over his formula for the gas, but the professor refuses... he won't let them sell it to foreign powers. Bartow gives him twenty-four hours to reconsider, "or else". When they leave, Kent hails a taxi and follows their car out of the city to a small farm home sitting next to an airfield. He takes note of this location for later.

Back at the Daily Star, Clark types up his interview with Runyan quickly, so he can get back to Bartow and his men. George, the editor, informs him about a call he just received... Professor Runyan was found dead in his home. Later in his apartment, Clark changes to Superman and returns to the farm home just in time to catch Bartow and his partners leaving on a plane.

The plane was flying high over the country of Boravia, a land currently troubled by civil war. Superman tears a hole in the plane's roof and drops in. Bartow grabs a parachute and jumps out, hoping to get away. Superman drops out of the plane and grabs hold of Bartow in mid-air, threatening to cut the chute to pieces if he doesn't give him the formula. After leaning on him a little more, Superman finally gets the name of the buyer: Lubane.

A party of Boravian soldiers find Superman and take him into custody, only to discover their bullets and bayonets are useless against his hard-as-granite skin. Growing bored of the soldiers attempts to kill him, Superman takes off. Before searching for Bartow and Lubane, he takes the time to destroy the weapons and munitions being used in the war. The warring armies are helpless to stop him!

Lubane's hideout isn't too hard to find. Superman catches sight of Bartow's car and follows him. He crashes through the roof, demanding Lubane give up the formula. But Lubane's scientist has already concocted a batch of the sinister gas. He holds up the vial for Superman to see, threatening to drop it and kill them both if he doesn't go away. Superman steps forward, and Lubane, startled, accidently lets the vial drop! The gas seeps up and into Lubane's lungs. In his dying breath, he wonders why Superman wouldn't die. The Man of Steel replies that his super physique means the gas had no effect on him.

The formula was in hand, but Superman wasn't done yet! He rushed to Bovaria's government building, where negotiations between representatives of the two warring factions were currently under way. However, neither side would agree to budge on their outrageous demands for peace, and so the meeting was to be adjourned. Superman burst in then, shouting that the talks must continue! The representatives argue that it was impossible. So Superman begins smashing the pillars around the room. The building starts to tremble as each pillar turns to rubble. He grabs hold of the remaining support pillar, threatening to collapse the structure on top of them unless they reconsider their terms. Admitting to each other that their demands were far-fetched, the two representatives finally each sign the peace treaty.

Returning home to Metropolis, Clark Kent is given a warm reception by his Daily Star coworkers for such an outstanding story. Bartow and his gang are arrested, and Clark secretly tears the formula to shreds, believing the gas is just too deadly to exist.

Appearing in "Superman and the Skyscrapers"Edit

Synopsis for "Superman and the Skyscrapers"Edit

After several deaths have taken place during the construction of the Atlas building, Superman takes it upon himself to do a little investigating. He discovers that the steel girders were being sabotaged on the orders of a crook named Butch Grogan, and decides to pay him a visit. Butch won't talk at first, but Superman demonstrates his strength by crushing Butch's gun in his hand, and his lips loosen up. He was being offered a large sum to see that the Atlas is never completed. The man who hired him? None other than Nat Grayson, CEO of rival company "Akme Construction". He wants Bruce Construction Inc., funder of the Atlas building project, to go out of business, eliminating the competition. Superman leaves Butch on the street as cops approach. When he tries to run, despite their warnings, Grogan is shot dead.

Nat Grayson has prepared for Superman's arrival by rigging his home with explosives triggered by movement. To Grayson's surprise, Superman makes it past the detonations. He rips the door to the office off its hinges and confronts Grayson directly. Not much force is needed on Superman's part, Nat Grayson turns out to be a cowardly man. He agrees to call the police and turn himself in, bringing justice to the men who lost their lives.

Back at the Daily Star, Superman, in his civilian identity of Clark Kent, meets with his editor over his latest report. He's asked how he managed to get the story of Grayson's arrest before any other paper. Just luck, Clark replies.

Retrieved from "https://heykidscomics.fandom.com/wiki/Superman_Vol_1_2?oldid=1621557"
Community content is available under CC-BY-SA unless otherwise noted.