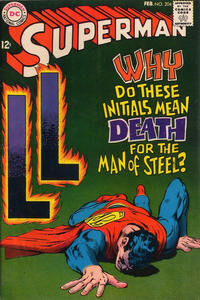 Appearing in "The Case of the Lethal Letters!"Edit

Synopsis for "The Case of the Lethal Letters!"Edit

Lorraine Lewis, a female scientist who had been in love with Superman but who found herself blocked by his three “LL” sweethearts, lures him into a deathtrap by capturing Lori Lemaris, Lana Lang, and Lois Lane.

Appearing in "The Fortress of Fear!"Edit

Synopsis for "The Fortress of Fear!"Edit

A being from Pluto comes to Earth, possesses Superman’s entire Fortress of Solitude, and turns it against him.

Retrieved from "https://heykidscomics.fandom.com/wiki/Superman_Vol_1_204?oldid=1380772"
Community content is available under CC-BY-SA unless otherwise noted.