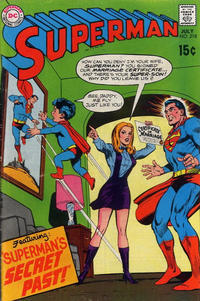 Superman is confronted by a woman who claims to have been married to him for several years and by a super-powered son whom she asserts is his child, but it all turns out to be a hoax of Mr. Mxyzptlk’s.

Retrieved from "https://heykidscomics.fandom.com/wiki/Superman_Vol_1_218?oldid=1380786"
Community content is available under CC-BY-SA unless otherwise noted.