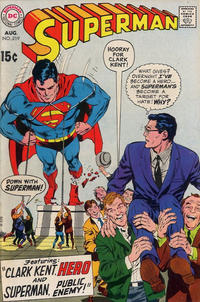 An alien race has to model itself after Clark Kent, and conducts an operation on Earth to make the mild-mannered Kent appear brave, and Superman a coward.

Appearing in "The Super Heat-Wave of Metropolis!"Edit

Synopsis for "The Super Heat-Wave of Metropolis!"Edit

Sunspot activity causes a heat wave in Metropolis and a hole in the Phantom Zone, enabling the villainous Vor-Kil, a klurkor-fighting criminal, to escape. Superman lures him back into the Zone with the help of Jimmy Olsen.

Retrieved from "https://heykidscomics.fandom.com/wiki/Superman_Vol_1_219?oldid=1380787"
Community content is available under CC-BY-SA unless otherwise noted.