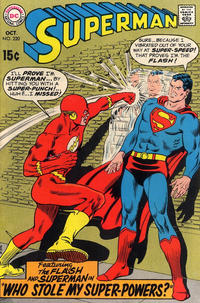 Appearing in "Who Stole My Super-Powers?"Edit

Synopsis for "Who Stole My Super-Powers?"Edit

Superman and the Flash switch costumes during a space mission against a malevolent plant intelligence, but are beaten, given amnesia, and thrown back to Earth separately. When they awaken, Flash thinks that he must be Superman, and Superman believes he is the Flash. Eventually, they regain their memories, trade uniforms, and move the Earth out of the way of the approaching plant-being, which falls into the sun and dies.

Retrieved from "https://heykidscomics.fandom.com/wiki/Superman_Vol_1_220?oldid=1380788"
Community content is available under CC-BY-SA unless otherwise noted.