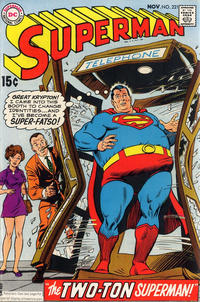 Appearing in "The Revolt of the Super-Slave!"Edit

Synopsis for "The Revolt of the Super-Slave!"Edit

Pancho, the oppressed victim of an island dictator, dresses in a homemade Superman costume, deludely believing he has super-powers. But he attracts the attention of the real Superman, who masquerades as him and helps overthrow the dictator.

Appearing in "The Two-Ton Superman!"Edit

Synopsis for "The Two-Ton Superman!"Edit

An alien nectar Superman drinks reacts with his super-antibodies and makes him super-fat.

Retrieved from "https://heykidscomics.fandom.com/wiki/Superman_Vol_1_221?oldid=1380789"
Community content is available under CC-BY-SA unless otherwise noted.