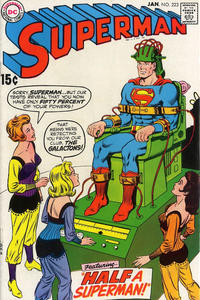 Appearing in "Half a Hero!"Edit

Synopsis for "Half a Hero!"Edit

When a crystalline menace threatens Kandor, Supergirl and two enlarged girls from Kandor masquerade as "The Galactons" and concoct an elaborate ruse to make Superman think he will die if he does not remain within Earth’s solar system. The plan's object is to keep Superman from returning to Kandor for R-Day. Kandor is under an artificial red sun and is endangered by a crystal menace, and Supergirl believes he would stay there to die with his fellow Kryptonians if he learned of the problem. Superman does learn of the menace and frees criminal biologist Gor-Nu from the Phantom Zone, making a bargain with him to switch bodies if he destroys the crystal. After Gor-Nu does so, Superman takes poison just before the switch. Threatened with death in Superman's body, Gor-Nu switches his mind back to his former body. Superman is taken from Kandor to the outer world, in which his invulnerability returns.

Retrieved from "https://heykidscomics.fandom.com/wiki/Superman_Vol_1_223?oldid=1380791"
Community content is available under CC-BY-SA unless otherwise noted.