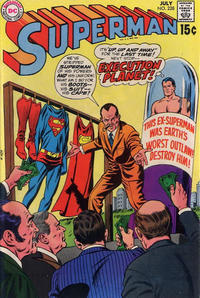 Appearing in "The Mystery Bombers!"Edit

Synopsis for "The Mystery Bombers!"Edit

Two slave programmers from space impersonate Earth people and conduct a bombing campaign as part of a gimmick to siphon off knowledge from Superman.

After Superman inexplicably loses his powers, the Anti-Superman Gang capture him, auction off his costume, and send him in a rocket to the Execution Planet.

Retrieved from "https://heykidscomics.fandom.com/wiki/Superman_Vol_1_228?oldid=1380796"
Community content is available under CC-BY-SA unless otherwise noted.